Ultra marathoner Eva Casale plans to push her body’s limits by running seven marathons in seven days in honor of service men and women from Long Island killed
in action. 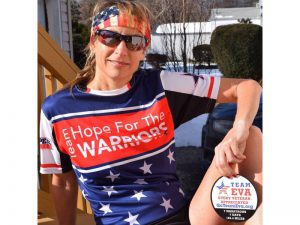 Casale leaves her Glen Cove home at 4:30 a.m. every morning so she can fit in a run before reporting to her full-time job as the Vice President of Information Technology at Suffolk Federal. On the weekends, she runs 20 miles each day.

She does all this to prepare herself to run 187 miles over the span of seven days, from April 2-8, to raise money for Hope for the Warriors, an organization that provides support programs for service members, veterans and military families.

Casale, who has lived in Glen Cove since 2003, is no stranger to running lengthy distances for a good cause. Since 2006, she has run more than 50 full marathons and 30 ultra marathons. Casale’s website also notes she donated a kidney to a complete stranger in 2006.

In 2015, she ran 150 miles from New York City to Montauk for the Leukemia & Lymphoma Society, raising $75,000. Casale also ran seven marathons in seven days for the first time in 2014, and she ran the 50-mile Ocean to Sound Relay course loop twice in 2013. This year’s event will be the first of her own runs that will support veterans.

Casale was inspired to raise money for Hope for the Warriors after she completed the Suffolk County Veterans Running Series. “[The series gave me] the chance to meet a lot of the soldiers, marines and disabled veterans,” Casale said. “I wanted to put my passion for running to work for veterans.”

Hope For The Warriors provides comprehensive support programs for service members, veterans and military families that focus on transition, health and wellness and connections to community resources. These program serve post-9/11 active duty, National Guard and reserve service members and veterans from all branches of the military, as well as military families, families of the fallen and military caregivers.

Casale is looking to raise as much as $100,000 through her sponsors and through people who donate on her website and sign up to run with her.

“Hopefully with the community’s support, we will be able to raise that amount,” she said.

Casale has constructed her own 26.2 mile routes in different parts of Suffolk County. Each of these runs, hosted by a different Suffolk Federal branch, will honor fallen service men and women from specific areas.

Runners, with a suggested $50 donation, can join Casale at the 19-mile mark of any of her marathons and run the last seven miles with her.

About two dozen people have already signed up to run with her team, Team E.V.A., which stands for “Every Veteran Appreciated,” though she noted runners are notorious for last-minute sign ups.

The final seven miles begin and end at a Suffolk Federal branch, so there is plenty of available parking for runners.

Casale plans to get through this grueling week by keeping a nice, easy pace and taking walk breaks.

“I think about the people who I’m running for, and it carries me throughout the day,” she said.

“We are honored to be the lead sponsor for one of our own and support Eva in her mission, not just to raise funds, but to bring attention to the needs of these brave men and women and their families who sacrifice so much,” O’Brien said.

Casale added she wouldn’t be able to accomplish this feat without the support of her company.

Casale said she’s training the same way she did when she ran seven miles in seven days in 2014. She looks to pace herself by running for nine minutes and walking for two minutes, and she plans to snack for energy throughout the continuous week’s miles.

She also gave us insight on what someone who runs 184 miles in a week will eat.

“Because it is a continuous week, I will snack on things like half of a sandwich of peanut butter and jelly,” Casale says. The food nutrition will give her more energy to accomplish her ambitious goals.

Information about each of the seven runs, including maps and street routes, are available on www.GoTeamEVA.org. Everyone who signs up to run with Casale will receive a commemorative T-shirt and medal.