Give HOPE to a New Generation: #Invest4HOPE

At Hope For The Warriors®, we rely on our community of supporters to impact military families nationwide. Our supporters come from every walk of life, inspiring us to challenge ourselves to give back during the holidays and into the New Year.
Through the end of the year, we’re offering a special opportunity to our community of supporters.
When you make a donation to Hope For The Warriors® in a friend’s or loved one’s name, they’ll receive a holiday card acknowledging that a gift—one that restores self, family, and hope to military families—was made in their honor.
By giving the gift of HOPE, you’re not only honoring someone special to you, you’re giving back to military communities nationwide, like the students of the Central Islip Senior High STAR Club.
Give HOPE to a New Generation
For the past two years, the Central Islip Senior High STAR Club has participated in the Long Island Run For The Warriors®. The STAR Club is made up of students who have a sibling currently serving in the military, or students who are first generation Americans. The program connects students with the Army—the soldiers serve as role models for students and assist them in team and confidence building. Many of the students are also training to prepare themselves to enlist once they graduate high school.
At the 2014 Long Island Run For The Warriors®, the STAR Club had a team of 35 runners. This year, the team more than doubled with over 70 runners. 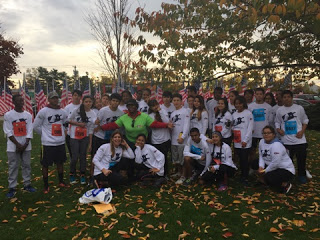 The students who participate in the run with the STAR Club come from underprivileged neighborhoods and some have no athletic backgrounds. The run provides these students with new opportunities to discover a love for running and view of life outside their communities. Many have never left Long Island before.
For the students who are first generation Americans or new to the country, the Run For The Warriors® introduces them to the idea of patriotism. Their STAR Club advisor, Nicole, a teacher at Central Islip Senior High School, mentioned that, “while at the run these students are honored and proud to wear their Run For The Warriors® t-shirts. Their appreciation for the country and those who protect it is evident.”
After the 2014 Long Island Run For The Warriors®, Central Islip Senior High received enough interest from the students to create a combined boys and girls cross country team. This year, with a growing team attending the Run For The Warriors®, transportation became a concern for the school system, which only budgeted for one bus that fits 45 students. Therefore, two recruiters that work with the STAR Program were able to get the Army to donate vans for the team to use for the day. Each year after the Long Island Run For The Warriors®, some students have joined various Long Island running clubs and started to participate in winter track programs.

“Their appreciation for the country and those who protect it is evident.”

Through their participation in the Run For The Warriors®, each student diligently reached out to teachers, administrators, friends, and family to raise over $600 to support combat wounded service members and their families. This is such an inspiring feat because none of these students have an extra $30 to cover even a race registration fee; however, they still choose to give back to their community. 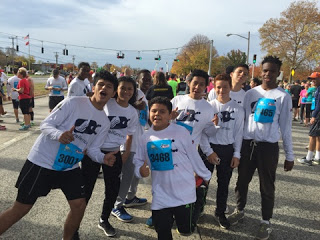 The Central Islip Senior High STAR Club and the Long Island Run For The Warriors® truly display how Run For The Warriors® unites military and civilian community members, connecting and educating each on the importance of embracing their neighbors. Through Run For The Warriors®, many of these young, promising students prove to themselves that they can meet new challenges and expand their horizons.
“This run has inspired so many. It has given students of mine new life. They saw something they could accomplish and experienced something they never knew existed. I could go on for hours and introduce you to kids whose lives have been changed by this event,” said Nicole.
Hope For The Warriors® would like to thank Nicole Keilitz for sharing her team’s story and selflessly investing in the lives of these students.
Giving the Gift of HOPE
Want to follow the lead of these inspiring students by giving back to the military community? You can, by gifting HOPE! To give the gift of HOPE in honor of someone special, visit our Gift of HOPE page.
Donations to support our programs may be made online, by phone at 877-246-7349 or by mail to 5101C Backlick Road, Annandale, VA 22003. Text the word WARRIORS to 20222 to donate.
Thank you! We wish you peace, joy, love and HOPE during the holidays and throughout the year.

P.S. Did you know you can support Hope For The Warriors® by shopping at smile.amazon.com? You can use your existing account – and there’s no cost to you. Amazon will donate a portion of the purchase price to Hope For The Warriors® when you select them as your designated charitable organization. Then, start shopping!