Give HOPE, Share HOPE: The Community of Kingwood, Texas Honors the Fallen

Get the Latest Updates
Facebook0Tweet0LinkedIn0Print0Email0
Today’s blog is written by Chrystal Thompson, Hope For The Warriors staff member. This month we have been sharing stories of how our supporters Give HOPE and Share HOPE.  The families of Kingwood, Texas are wonderful examples of this.  To get involved in the 4th Annual Kingwood Fallen Heroes Memorial Golf Tournament, send an email to kingwoodfallenheroes@gmail.com.
On
April 26, 2014, I attended the 3rd Annual Kingwood Fallen Heroes Memorial Golf
Tournament in Kingwood, TX.
The
501c (3) organization honors the fallen heroes of the Kingwood community to
remember those that were killed in action while serving their country and to
raise funds in support of organizations like Hope For The Warriors®.  The three fallen heroes that the organization
has recognized throughout the past three years are Sgt. William Meeuwsen, USA
KIA, LCpl Luke Yepsen, USMC KIA, and Sgt Brandon Bury, USMC KIA.

All
three graduated from Kingwood High School.
William, who went by Bill, was killed on November 23, 2005 when his unit
came under direct fire during combat operations near Baghdad, Iraq.  Luke was killed on December 14, 2006 while
conducting combat operations in the Al Anbar Province of Iraq.  Brandon was killed on June 6, 2010 while on
patrol in Southern Afghanistan.  All were
young, honorable, and strong men who were survived not only by their parents but
also by loving family members and friends.  All three were killed serving our country.
In
a media release leading up to the 3rd Annual Kingwood Fallen Heroes
Memorial Golf Tournament, Scott Mitchell, said “we
will forever miss these three fine young men who gave their lives so we may
continue to enjoy the many freedoms that come with being an American citizen.
This tournament celebrates their strength and courage; and yields a promise
that their sacrifices will never be forgotten.”

After
meeting and speaking with Scott and his father Don Mitchell for the first time,
I realized that this event would be nothing like what I have experienced
before. This year, 180 golfers participated in the
tournament, coming from surrounding cities like Humble and Atascocita, and as far
north as Dallas and Norman, Oklahoma.
Among the golfers, there were family members who came to the reception
following the tournament. 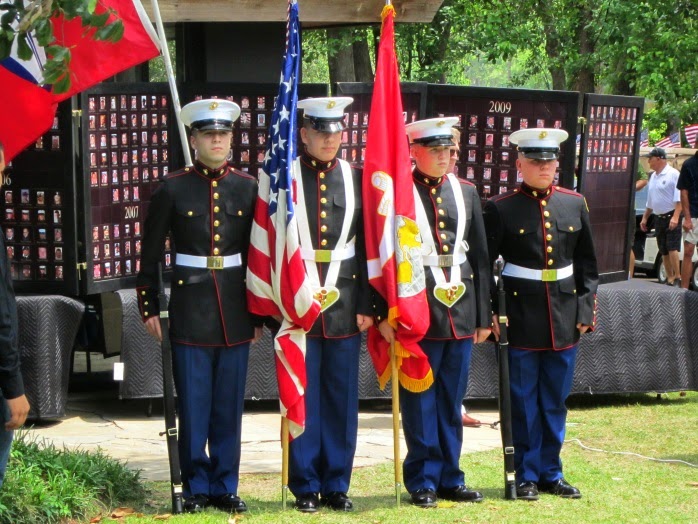 The
reception included an awards ceremony, raffle, silent auction and dinner.  The raffle and silent auction items were donated
by members of the community and local businesses. The Houston Area Chapter of
Blue Star Mothers of America, Inc. chapter helped in the buffet line, serving
food that was catered by Monterey’s Little Mexico- a local restaurant chain whose
fund raising coordinator, Jarrod Glowacki, went to high school with two of the
fallen heroes. The guest speaker this year was David Cantu, the Harris County
Veteran Service Officer, who shared his hopes of serving those veterans that
come home with physical and psychological wounds from serving overseas. 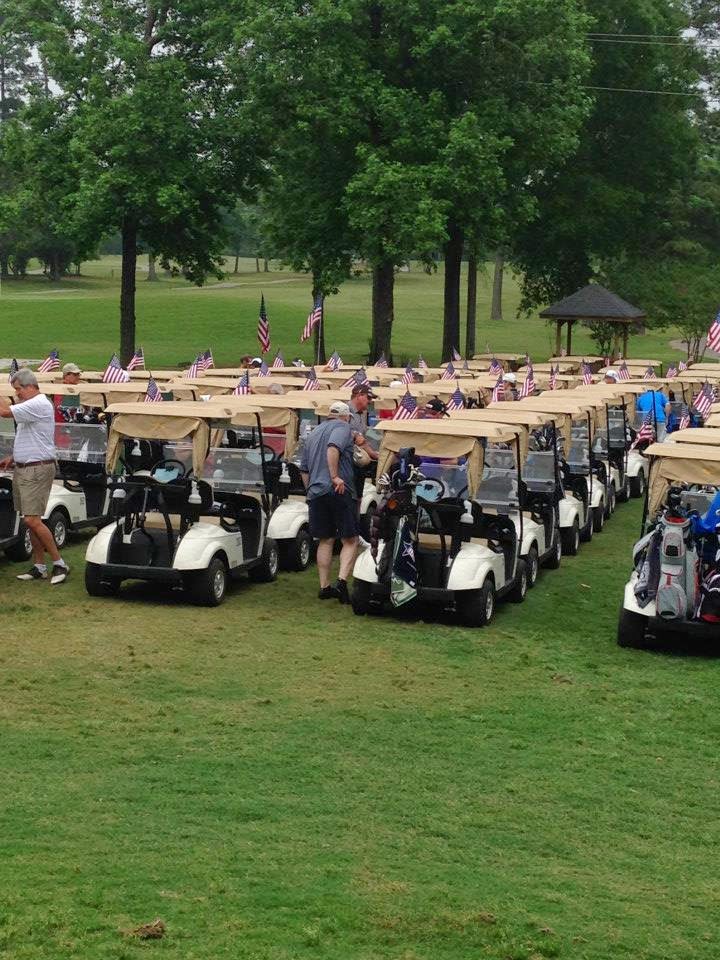 Seeing
the degree of community coming together to celebrate the lives of three men who
gave the ultimate sacrifice while honorably serving their country was very
surreal.
My
counterpart, Gus Cabarcas, Community Development Coordinator with Hope For The
Warriors®, came down from Dallas for his second year.  For the past three years, Kingwood Country
Club, known as The Clubs of Kingwood, has opened their championship courses and
“best in Texas” green fairways to the event.
This year’s beautiful opening ceremony included a memorable twenty one
rifle salute from the local Marine Corps Reserve Unit, 1st Battalion
23rd Marines prior to the shotgun start.
The weather
was great along with the turnout. Once again Scott, Don, their families, and
the volunteers did a great job putting this event together.  I first met Don and Scott in March of 2013
and from the start I saw their commitment to this event and how hard they work
to make this possible.  The one thing
that I remember the most is, how the community of Kingwood comes together once
a year starting the night before to remember the sacrifices that were made by
their three local patriots.  – Gus
The
night before the tournament, the Glowacki family hosted a pre-registration
dinner at Monterey’s Little Mexico in Humble, with a percentage of proceeds
going towards the Kingwood Fallen Heroes.
Amber Johnson, Critical Care Coordinator for Hope For The Warriors®,
described the compassion shown from the local members of the community, businesses,
cities, and organizations, as truly inspiring.
The Hope For The Warriors® relationship with Kingwood Fallen Heroes
started with Amber.
In
2010, after being told the news that no mother will ever be prepared to hear,
Terri Bury received a visit from her close friend, Nancy Johnson, Amber’s
mother in-law.   Immediately Mrs. Johnson
called her daughter in-law and within minutes Amber was in touch with Mrs.
Bury, offering emotion support, sage advice, and travel arrangements for family
to say their goodbyes to Brandon at his memorial services in San Diego and
Kingwood.
Soon
after, Scott, Brandon’s best friend, decided to host an event to honor Brandon,
Bill, and Luke.  Looking back on the
first Kingwood Fallen Heroes Memorial Golf Tournament in 2012, Amber shared a
scene that will always remain close to her heart.
“The patriot
guard lined most of the trails leading up to the golf course with flags. It was
breathtaking to travel through this mile-long trail onto the course with six-foot
t tall American flags catching the sun on either side.  It took so much time and effort for them to
set it up but that is how everyone is during this event. They don’t care how
much time and effort it takes to get the job done right to properly honor the
three fallen men. It is truly an event where everyone comes together.”

This
year, the tournament benefited a total of three nonprofit veteran service
organizations: Hope For The Warriors®, The Houston Area Chapter of Blue Star
Mothers of America, Inc. and Operation Military Embrace, Inc. Hope For The
Warriors® received $30,000 from the Kingwood Fallen Heroes Memorial Golf
Tournament to support programming for post-9/11 combat wounded service members,
their families, and families of the fallen.
Facebook0Tweet0LinkedIn0Print0Email0