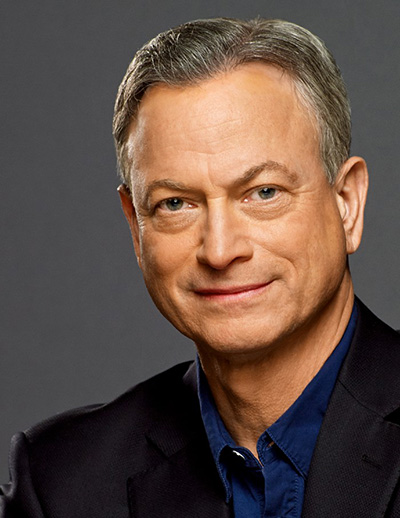 Sinise’s portrayal of Lt. Dan Taylor in “Forrest Gump” formed a connection with servicemen and women throughout the military community. After several USO handshake tours in 2003, Sinise formed the “Lt. Dan Band” in early 2004 and began entertaining troops serving at home and abroad.

In 2011, Sinise established the Gary Sinise Foundation with a mission to serve and honor our nation’s defenders, veterans, first responders, their families and those in need by creating and supporting unique programs that entertain, educate, inspire, strengthen and build communities. Of its many outreach efforts, the Gary Sinise Foundation is building custom Smart Homes for severely wounded veterans, serving hearty meals to deploying troops and hosting spirit-boosting festivals for patients, families and medical staff at military hospitals.

Hope For The Warriors has partnered with the Gary Sinise Foundation to help its R.I.S.E. program provide adaptive homes to combat-wounded veterans. Hope For The Warriors’ Make a House a Home program offers grants to enhance the homes by incorporating hobbies, in-home businesses and other life passions that personalize the space for the individual/family.

Joining Sinise as co-host is retired U.S. Marine Col. Barney Barnum Jr. Barnum served 27 years in the United States Marine Corps and was the fourth Marine to receive the Medal of Honor during the Vietnam War.

Beginning at 6 p.m., the annual event honors members of our nation’s armed forces and their families with the Vigiano Family Hope & Courage Awards. In addition, Hope For The Warriors will introduce six new awards highlighting individuals, corporations and organizations who have stood beside the organization in serving military families.

This year’s gala honors the memory of John Vigiano (1938-2018). A longtime Hope For The Warriors volunteer and supporter, Vigiano and his family have lived a life of service. Vigiano, a former Marine, retired as decorated FDNY fire captain. Despite his record of service, Vigiano was most proud of his family and the paths his two sons chose: John Jr., a FDNY firefighter, and Joe, a NYPD detective, both losing their lives in the 9/11 attacks.

“As we embark on the 10th Annual Got Heart Give Hope Gala, we’re honored to have Gary Sinise and Col. Barnum host such a memorable night honoring John Vigiano,” said Robin Kelleher, Hope For The Warriors co-founder and president. “Each year we honor service members and military family members who have demonstrated both hope and courage in the face of extraordinary circumstances. Being that John Vigiano and Gary Sinise have the same passion and profound respect for those who serve, we couldn’t have a more perfect host to help us honor John’s legacy while celebrating the night’s honorees.”

For more information on attending, sponsoring or donating to the 10th Annual Got Heart Give Hope Gala, visit hopeforthewarriors.org.