“On September 11, 2001, firefighter Stephen Siller had just gotten off the late shift at Squad 1, Park Slope, Brooklyn.  He was on his way to play golf with his brothers when his scanner told of the first plane hitting the Twin Towers.  He returned to Squad 1 to get his gear and headed for the towers.  When Stephen drove his truck to the Brooklyn Battery Tunnel, it was already closed to traffic .  With sixty pounds of gear strapped to his back, he ran through the Tunnel, hoping to meet up with his own company, Squad 1.”


“Years later, Hope For The Warriors® and thousands of others run that same route.  A few years ago, I had the honor to join our group and a young Marine, Matt Bradford.  Matt is a blind, double amputee and through Team Hope For The Warriors®, he is able to race on a handcycle.  As I exited the tunnel, I found the line up of firefighters, holding banners with photos and the names of those lost on 9/11. Just as tears began to stream down my face, I heard Matt’s voice coming up behind me. He was cheering with all his heart for the firefighters that gave the ultimate sacrifice with no thought of his sacrifices.”


“I am so proud to be a small part of the organization that made it possible for him to experience this event and even more, allow the firefighters of New York to experience him.” 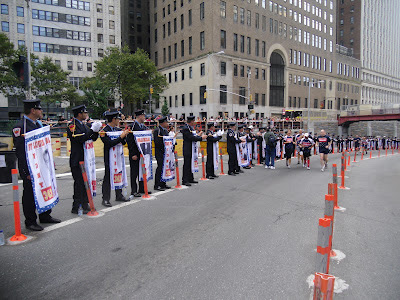