Dealing with PTSD and Deployments

As we come to the end of March and Women’s History Month, we have one last posting that recognizes the service and sacrifices of our military spouses.  Today’s guest blog posting is from Meghan, the spouse of a deployed service member who has been diagnosed with PTSD.  She also has her own blog:  http://sedlakwilliamson.blogspot.com/.

“My husband, Staff Sgt Randy Williamson, recently left for his 5th
deployment.  Every time he leaves, it is hard.  His diagnosis of PTSD
has made each departure a little more difficult, because we just don’t know.”

“On April 30, 2004, my husband was injured in a suicide car bomb
explosion in Fallujah, Iraq.  As a result, he lives every day with shrapnel
in his shin, as well as a visible scar on his forehead.  Every day since
then has been a struggle- not with the visible injuries- but the invisible
injuries.”

“Soon after he was injured, he was diagnosed with Post Traumatic Stress
Disorder.  While it freaked me out a bit, I didn’t really notice anything
different about Randy when he returned home in September 2004.”

“It wasn’t until we had successfully made it through three back to
back deployments to Iraq, and had accepted non-deployable orders that we had a
chance to catch our breath and process what he had been through…. what we
both had been through.  We adopted our awesome furbabies- 2 cats and a
very spoiled dog, and settled into a normal life.  (At least as normal as
the Marine Corps allows!)”
“I don’t think I realized just how broken my husband was as a result of his
struggles with PTSD.  On February 27, 2010, Randy took what we call a
“leave of absence.”  He walkedout- on our furbabies, on our
marriage, on our lives together.  He decided that he just couldn’t handle
his life as it was anymore.  A lot of things had happened in a very short
period of time.  It would have been a lot for anyone to deal with, let
alone someone who had been through everything that Randy had been.”

“It took three months for Randy to realize that he needed help
for what he was dealing with, and that he couldn’t blame me for the way he was
feeling.  He realized that it was ok for him to ask for help, and it was
OK for him to talk about his experiences.  He realized that I wasn’t going
to judge him, or think less of him because of what he was telling me.  I
was- and am- incredibly proud of Randy for admitting that there was something
there he needed to deal with, and for taking control and coming face to face
with the nightmares and flashbacks he was experiencing.”

“In September of 2010, Randy received orders to a unit that
would be deploying to Afghanistan in March of the following year.  Panic
immediately set in- mostly for me.  On top of the usual nervousness and
fear that comes along with a combat deployment, this one would be the first
since his “leave of absence.”  He deployed on February 25, 2011.”
“That deployment day was by far the hardest- mostly
because I was back to not knowing.  Would he be ok? What would happen if
his PTSD did surface again? How would he deal with that? As a squad leader,
would he even be willing to ask for help?? Would he be able to call me if he
needed to? It was incredibly difficult to let go of his hand that day as he got
on the bus- I was terrified, and I think a part of him was too, but we both did
our best to put on a brave face and smile and wave as the buses drove off.”
“I knew that I just needed to trust him- that he would know
what he needed to do.  Two weeks later, I got my first phone call.
Randy sounded great- he had gone out on his first combat patrol the day before,
and he said he felt really good about it.  He felt confident, and didn’t
have any problems at all.  I was so relieved, I immediately broke down
crying.  It was such a relief to hear him sounding like himself, and to
know that he was in control.”

“Randy returned safely from that deployment in September of
2011.  We have not dealt with any flashbacks, nightmares, or sleepless
nights in quite some time.  I am constantly reminding him that I am always
there for him, and will always listen to whatever he wants to talk
to me about.  We have become much better at communicating, and I am
constantly checking in with him to see if there is anything he wants to talk
about.  We have learned that it is much easier for him to talk to me when
the lights are out, so we can’t actually see each other’s faces. ”

“We have not allowed Post Traumatic Stress Disorder to break
us.  We have only grown stronger because of it, and I continue to be
incredibly proud of Randy as he advocates for himself and his fellow
Marines.  He speaks out against the stigma associated with PTSD, and makes
sure that his Marines know it is OK to ask for help.  He wants them to
know that asking for help is not a sign of weakness, it is a sign of incredible
strength.” 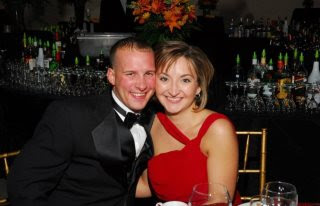