This month, a bicycle was donated to active duty Marine, Michael Politowicz. “Poli”, an active cyclist, is based at Camp Lejeune and most recently participated in the Warrior 100 Bike Ride with President Bush in Texas.

Mike’s friend, Zane Schweer, recounted specific features of this incredibly customized bike and how it positively impacts Mike’s life. The two of them worked together on designs that would reflect Mike’s journey to recovery. 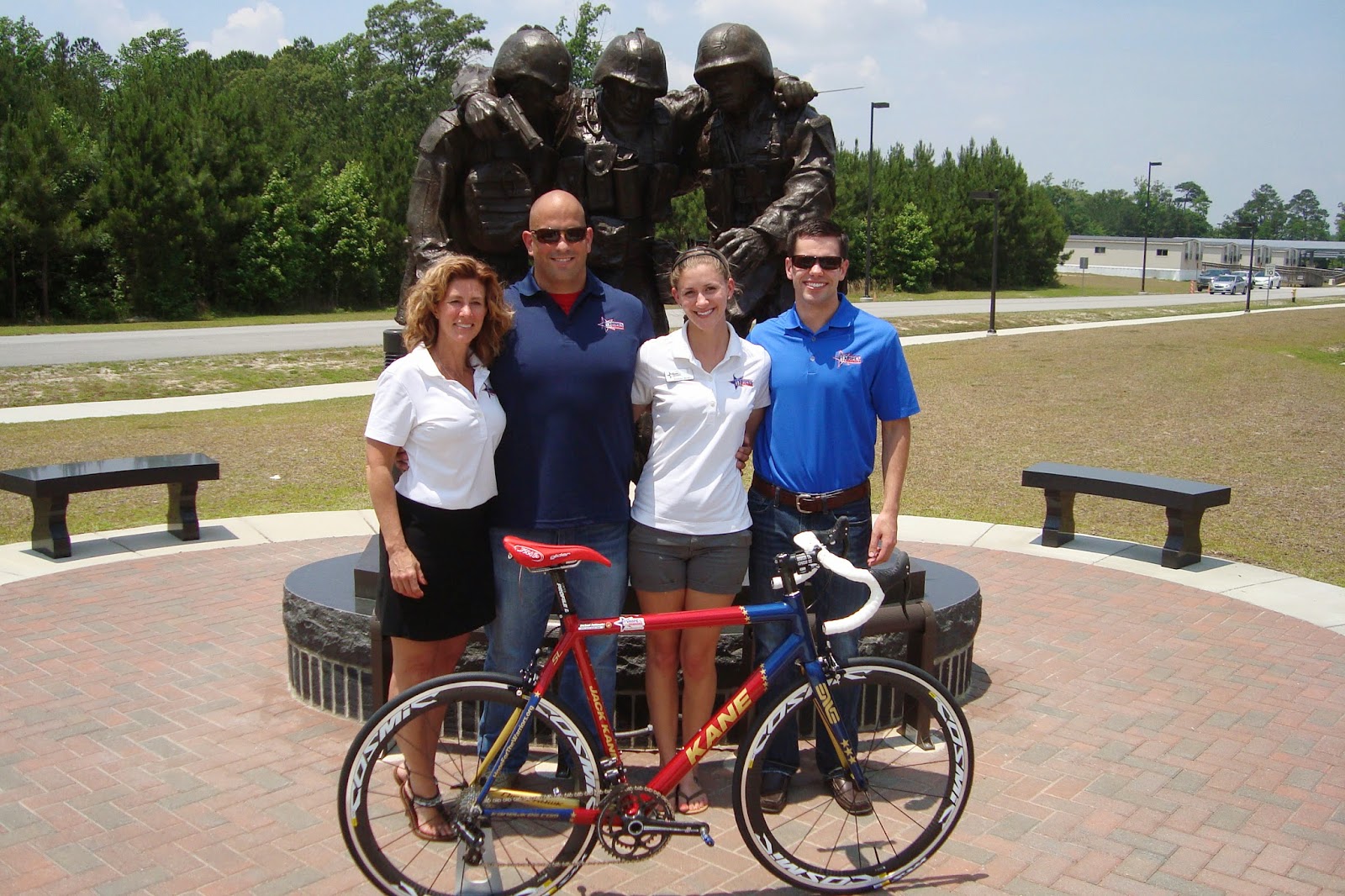 The precision with which Mike and Zane searched to find the right bike, equipment, and design demonstrates how passionate Mike really is for cycling and the Marine Corps. The finished product is no ordinary bicycle. It was meticulously customized with adaptive equipment to allow Mike to ride with the comfort he once experienced and enjoyed.

Due to his injury, he has limited wrist movement that causes his wrist and arm to ache. He often couldn’t rotate his wrist enough to completely shift, resulting in discomfort that began to take a toll during and after his ride.

The limited arm/wrist movement affected his hands as well. He needed to find a handlebar that would eliminate the numbness caused from riding. After trying a few different handlebars, the Profile Design Canta carbon bar was the right choice. It is an ergonomic bar that stretches out his hands and has stopped the numbness. The carbon fiber reduces the amount of road vibration that goes into his hands. The less his hand, arm, and body have to absorb, the easier it is to ride. 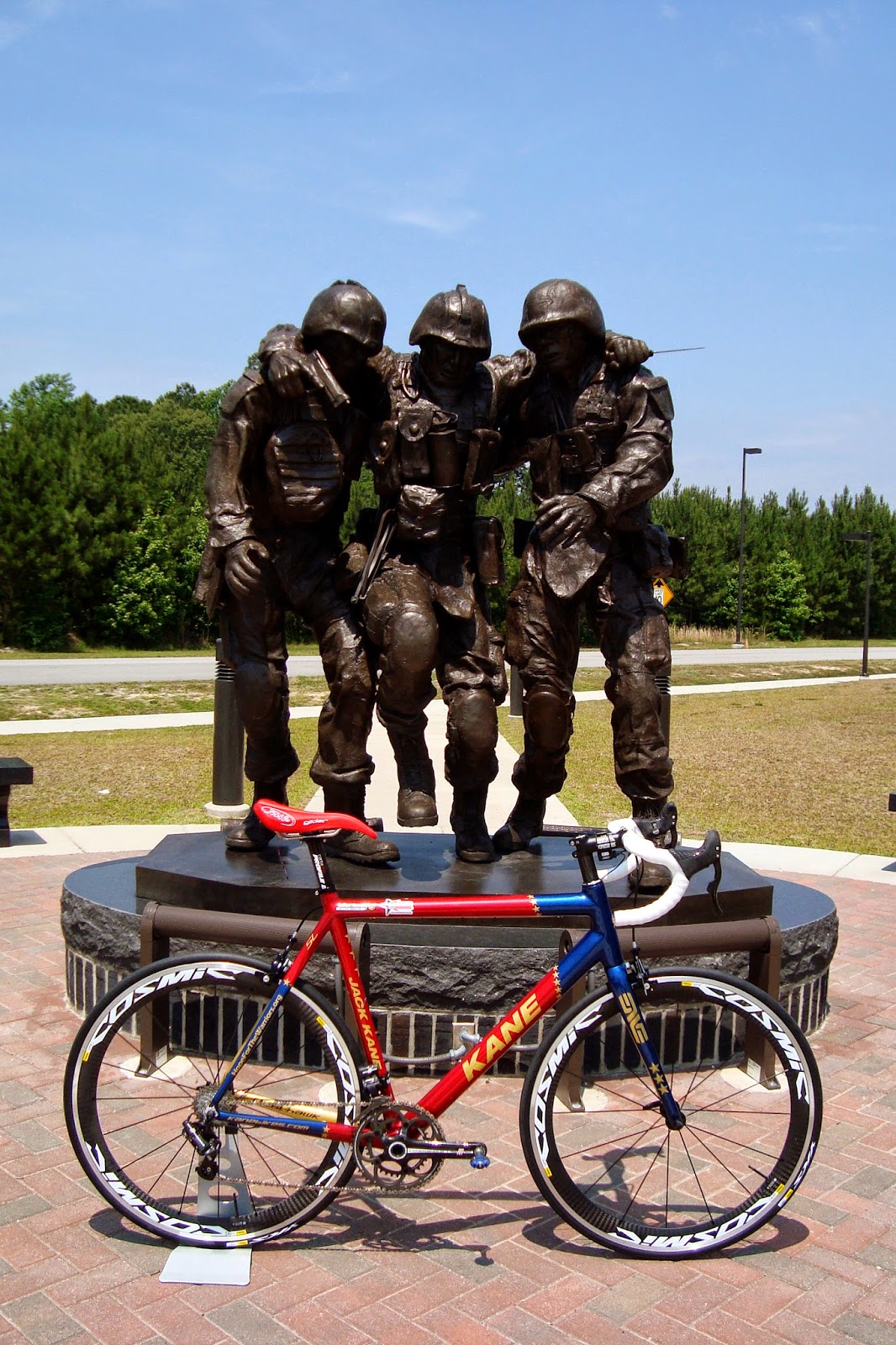 According to Zane, bicycles have used cable shifting for decades, but in the past couple years electronic shifting has emerged. “Mike is a prime example of who can benefit from technology like this. With cable shifting, the cyclist has to rotate his or her wrist and push hands/fingers to shift. But for those incapable of full wrist motion, it’s hard work,” he continued.

As a result, Mike wanted to use Campagnolo EPS shifting. Electronic shifting allows a rider to simply push a button to shift. An important detail is that Campagnolo shifters are set up to use either the thumb or index finger. With it being electronic, Mike is able to easily press his thumb and/or index finger to shift. This reduces the strain and effort his wrist has to go through.

These are all components we don’t think about when shopping for a bicycle, but when broken down show the extent to which Zane and Mike labored over making this meaningful to Mike.

Mike had to then think of the meaning behind all of the design details of his bike. He wanted to honor Hope For The Warriors®, the Marine Corps, and his fallen brothers from combat. 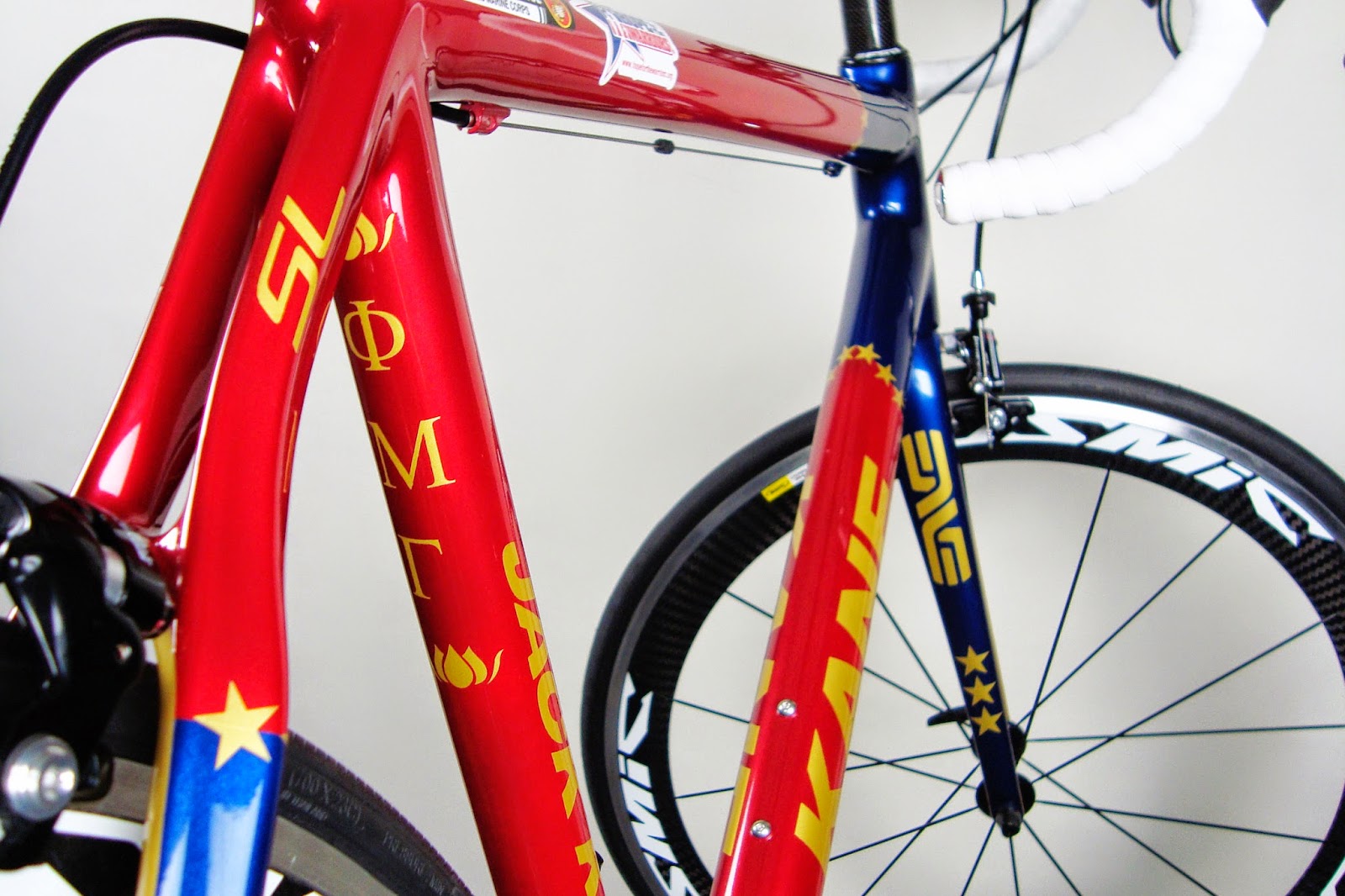 On the backside of the seat tube of the bicycle, there are three Greek letters and two Lotus Flowers. The Greek letters and large gold star stand for the last name initial of his three fallen Marine brothers, painted facing the rear so they are always watching Mike’s back, or his “six.”

The Lotus Flowers represent the organization “Semper Fidelis Health & Wellness.” This is one of the very first organizations Mike came across during his rehab. They introduced him to cycling, yoga, and how changing his eating habits would help both his physical and mental health during his healing.

With the final pieces of the design coming together, Zane explains that Mike was “adamant” on incorporating Hope For The Warriors® somehow. 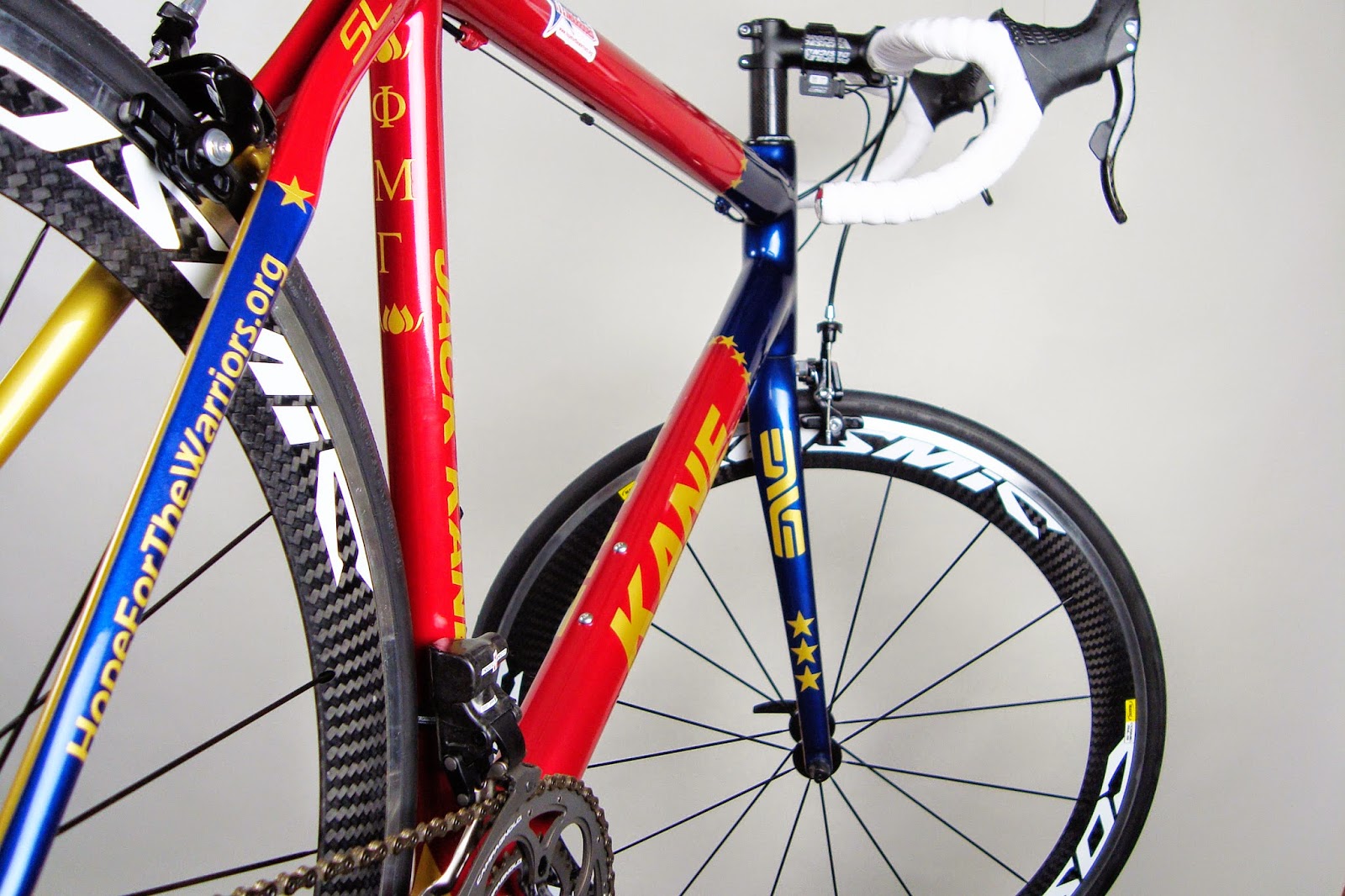 Mike and Zane worked on the design of this bike for over a year. Once it was nearing completion Mike shared one of the final pieces for helping him find peace with all that has happened to him. The bike has a metallic blue, gold, and red with a gold pearl finish painted in Jacksonville. It is, according to Zane, “a symbol of his journey.” 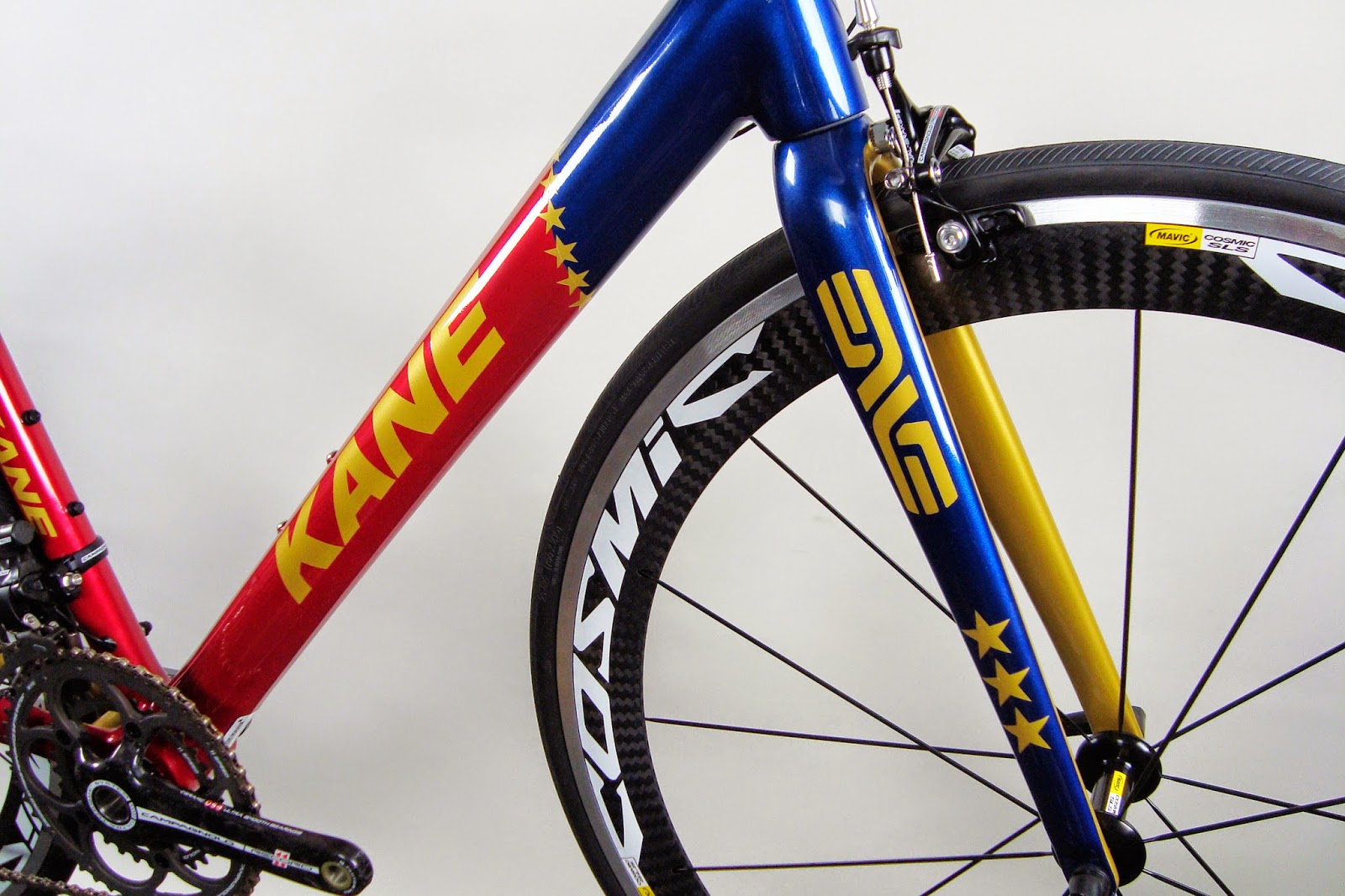 Thank you to Zane for providing the wonderful information to write the story of the meaningful bicycle donation to Mike Poli.