Get the Latest Updates
FacebookTweetLinkedInPrintEmail
Written by Brianne Sampson

There are roughly 23.4 million veterans in the United
States. In addition, there are an estimated 2.2 million service members
actively serving and 3.1 immediate family members. Yet these numbers only
represent about 1% of the general population (SAMHSA, 2014).

For those who have served, both on the frontline and back on
the homefront, the demands and stresses of military life are unique and widely
misunderstood throughout the general population. Consider this, nearly 18% of
service members returning from Iraq or Afghanistan have post-traumatic stress
disorder (PTSD) or depression (SAMHSA, 2014). So roughly, 2 out of every 20
service members returning from Iraq and Afghanistan are suffering from a mental
health diagnosis. Yet only half of those who suffer will seek out professional
treatment.
Alcohol use within the military culture is considered common
and is often a part of military traditions. Once a service member or a veteran
begins consuming alcohol at a rate higher than intended or begins experiencing
complications from alcohol use within their lives, the substance use becomes a
problem and is then considered to be a substance use disorder. It is estimated
that nearly 30% of those veterans already suffering from a mental health
disorder, such as PTSD or depression, are also suffering from a substance use
disorder. When a service member suffers from a mental health disorder and also
has a substance use disorder, studies show they are even more resistant to
seeking professional treatment.
While stigma associated with mental health disorders are not
isolated to the military population, the barriers to seeking treatment have
different origins than the general population. Those service members still
actively serving fear the loss of respect and trust within their units.
Furthermore, seeking treatment is believed to be a sign of weakness (Hoge et
al., 2004). Considering camaraderie is the backbone of military culture, this
type of stigma can be crippling. 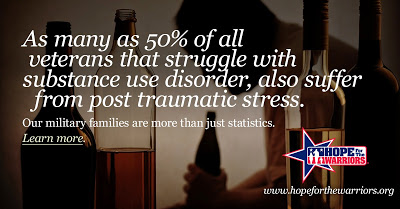 There are
programs within the Department of Defense and the Veterans Health
Administration that are addressing these issues. However, more support is
needed within our local communities. These programs cannot be successful if
veterans are not willing to access treatment. Reaching out to veterans in need
should be a shared responsibility, and one that should not be taken lightly. Resources
such as Coaching into Care, a confidential hotline, have also been created to
help family members and friends talk to veterans about these difficult topics.
We should all be willing to serve them, just as they have served our country.