CASEY’S GENERAL STORES RAISED MORE THAN $670,000 FOR HOPE FOR THE WARRIORS 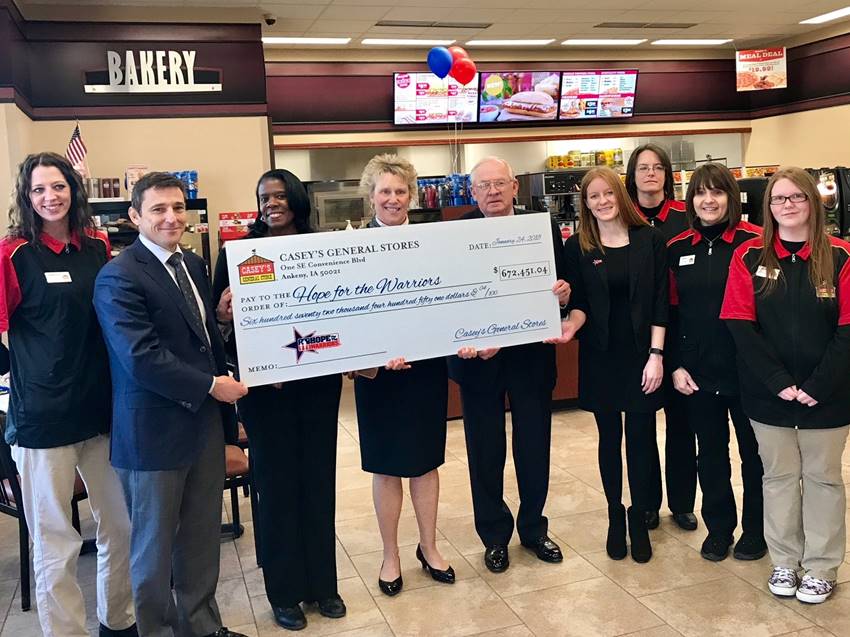 ANKENY, Iowa (Jan. 30, 2018) – During its annual dog tag campaign, Casey’s General Stores raised more than $670,000 for Hope For The Warriors®, a national nonprofit dedicated to restoring a sense of self, family and hope for veterans, service members and military families.

Through an additional in-store campaign, a $15,000 donation from MillerCoors was also included in the donation.

Funds will benefit veterans, service members and military families through a variety of programming including transition services, clinical health and wellness, sports and recreation and community development and engagement.

“At Casey’s, we have a profound sense of gratitude for those who have served their county and we are proud to be partnered with such an incredible organization,” said Jay Soupene, senior vice president, operations. “Hope For The Warriors is completely dedicated to supporting our service members and their families. This is our opportunity to give back to those who have given so much in the defense of our great nation.”

In six years of supporting Hope For The Warriors, Casey’s General Stores have raised more than $3.9 million.

“We’re honored for the continued support of Casey’s, its employees and customers to the veterans, service members and military families that we serve,” said Robin Kelleher, co-founder and president of the national nonprofit. “As always, thanks to this annual campaign we can continue to impact the lives of those we serve through our programs right here in the Midwest and across the United States.”