March is Women’s History Month and today we highlight a woman who will be honored at this year’s Got Heart, Give Hope® Gala. 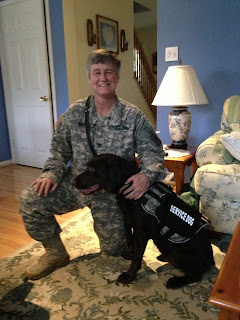 COL Heather K. Meeds has served in the South Carolina National Guard since graduating from college in 1985.  She began serving part time while working full time as a teacher.  However, after 11 years, she decided to pursue her military career further. Although it was not her goal, Heather has succeeded in achieving several “firsts” within the military.

Heather deployed to Iraq for her first deployment in April 2003 as the 151 Signal Battalion Commander.  This put her as only the second female battalion commander in the South Carolina Army National Guard and the first to deploy into a war zone. Almost 700 were under her command for the year long deployment.

She returned in August 2011 and quickly took a new position as the first female G6 of the Army National Guard at the headquarters in Arlington, VA.

On April 17, Hope For The Warriors® will honor Heather for her leadership in the National Guard at the Got Heart, Give Hope® Gala.  But more importantly to our organization, she will be honored for her leadership in talking openly about the struggles of PTSD and the importance of seeking help. By her willingness to talk to other service members, she has helped many face their own challenges and get the help they need.