Running with Team Hope For The Warriors in the TCS New York City Marathon is more than just competing in a race. For community Team Hope For The Warriors member Brad Webb, this race means more because he is running in memory of his friend, Marine Corps veteran, Andy Yeo. For the second year in a row, Brad will be pushing himself the 26.2 miles along with three friends, Scott Parrot, Jim Fanning and Brian Hammond in honor of Andy. 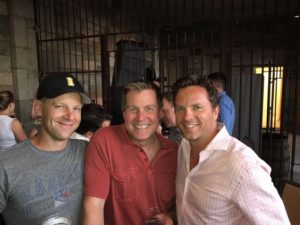 Andy Yeo was a great friend, dedicated father, loving husband and an outstanding Marine. He passed two years ago—too soon. Andy was a supporter of Hope For The Warriors and believed in our mission to restore self, family and HOPE. His dedication to the organization sparked Brad and his other friend’s commitment to representing HOPE in the marathon. Beyond sharing HOPE, their choice to honor Andy in the race shows his 11-year-old son that even though his dad is no longer with us, his spirit and contagious smile are not forgotten.

Brad Webb is a Licensed Associate Real Estate Broker for Douglas Elliman Real Estate. Since joining Team Hope For The Warriors in 2018, he has raised over $4,500 in memory of Andy in support of military families. You can support Brad and make a donation in honor of Andy here.

Run with Team Hope For The Warriors at the 2019 TCS New York City Marathon. For more information email Irina Watkins at iwatkins@hopeforthewarriors.org