On International Women’s Day and Women’s History Month, we would like to highlight our female veteran staff members who have made their mark on our country’s history and women’s history through their service in the United States Marine Corps and United States Navy. 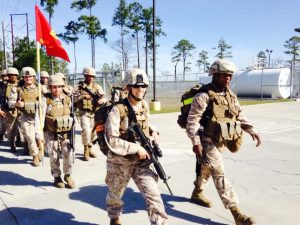 Captain Melanie Griffith obtained her Bachelor’s degree in Architectural Technology from New York Institute of Technology. She was commissioned as a Second Lieutenant into the United States Marine Corps in August of 2009. During her time in the Marines, she served as a Female Engagement Team Leader deploying to Marjah, Afghanistan in 2011. She deployed again in 2013 as the Senior Watch Officer for with the Combat Logistics Regiment 2 in to Helmand Providence, Afghanistan. She transitioned from the Marine Corps in March of 2015 and assumed her role of Hope For The Warriors Community Engagement Coordinator in May of 2015. 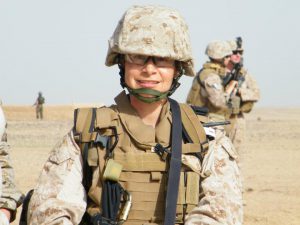 Sergeant Major Raquel Painter (Ret.) earned the title “Marine” at Marine Corps Recruit Depot Parris Island, SC in August of 1989 and retired after nearly 27 years of service in January 2016. At the time, she was 1 of 23 females in the Marine Corps to earn the rank of Sergeant Major. During her service, she completed one tour of recruiting duty, support humanitarian efforts of the bombing of the Alfred P. Murrah Federal Building in Oklahoma where she was selected to lay the Presidential Wreath on Alfred P. Murrah’s memorial site, and selected as Military Member of the Year for two consecutive years. She deployed in March of 2007 with Combat Logistics Battalion 8 to Camp Fallujah, Iraq in support of Operation IRAQI FREEDOM. She deployed again in July of 2009 with Combat Logistics Battalion 6 in support of Operation ENDURING FREEDOM, where she was responsible for Marines and Sailors at 5 different Forward Operating Bases in Afghanistan and was Brigade Headquarters Group Female Engagement Team Leader completing 11 patrol missions. During this deployment, she also served as the Battalion Sergeant Major, she was senior enlisted advisor for over 900 Marines and Sailors in a combat environment. After being promoted to Sergeant Major in 2010, she served as Sergeant Major for Marine Attack Squadron 513 and deployed with the 31st MEU. She received her last assignment as Sergeant Major of Wounded Warrior Battalion- East. After her retirement in 2016, Raquel took on a role as the Hope For The Warriors Community Development Manager and was recently promoted to Community Development Director.

What is a FET Team? 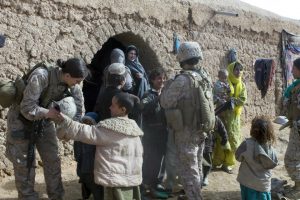 Female Engagement Teams (FET) is a small group of female Marines that were attached to Infantry units that would engage with the women and children in Iraq and Afghanistan without breaking cultural standards. They would collect biometrics and information on the local population, specifically the hierarchy of different villages. This information played a key roll for Middle East Military Advisors. 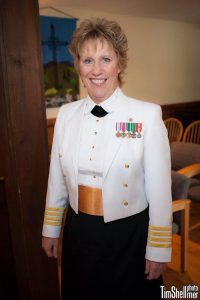 Deb McKay is the Vice President of Well-Being for Hope For The Warriors. As VP Deb oversees all programming for Clinical Health and Wellness, Sports and Recreation, Transition, and Military Relations. CAPT McKay retired from the Navy Nurse Corps in 2005 after 28 years of service. Entering the Navy in 1977, CAPT McKay’s formative years as a young nurse were guided by senior nurses and doctors that had served in Vietnam. Her career was anchored by the OEF/OIF/OND conflicts and CAPT McKay takes great pride in knowing the skills she learned in navy medicine have been passed down to a new generation of warfighters.