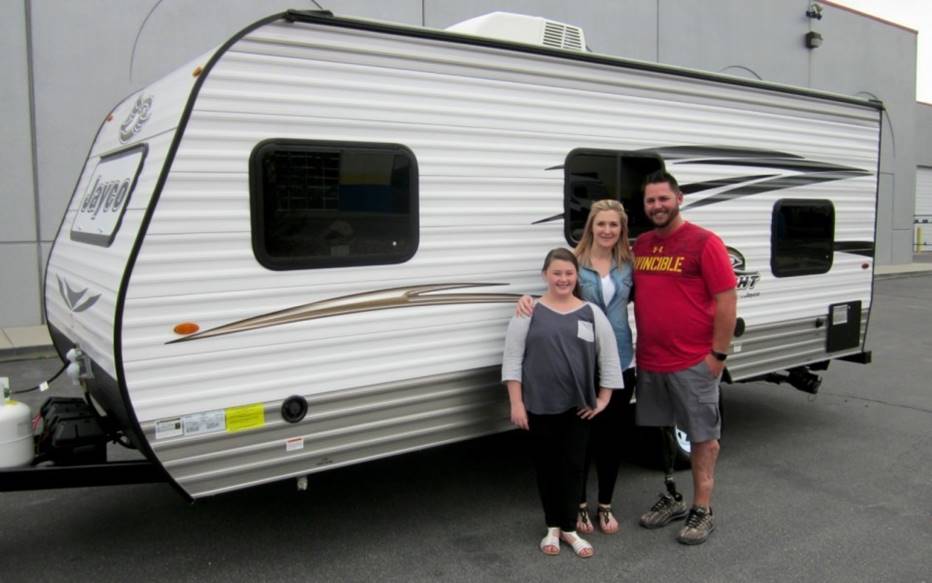 HARRIMAN, Utah (May 9, 2017) – Harriman-based Army Specialist Bryant Jacobs recently received A Warrior’s Wish® of a pull-behind travel trailer from Hope For The Warriors®.

A lover of all things outdoors; camping, hunting and more, Jacobs requested a travel trailer allowing him the freedom to get back outdoors despite his injuries. Thanks to the more accommodating environment, the father of two plans to use the new trailer exploring Utah’s state parks and scenic outdoor attractions with his family.

“Thanks to Hope For The Warriors, this trailer is going to change my family’s lives,” said Jacobs. “This trailer means that we don’t have to sit around all summer dreaming of going camping and weighing the pros and cons of camping in a tent. Being an amputee, it’s sometimes difficult to see the outdoors as an option for any period of time. It’s really important to keep my residual limb clean and a trailer is really the best option to do that.”

Active in his local veteran community, Jacobs hopes to take other veterans camping in addition to using the trailer for family vacations. “My plan is to arrange camping trips with other vets, both disabled and not, to get out and learn adapting skills from each other, while enjoying the outdoors.”

In 2003, Jacobs enlisted in the U.S. Army and in January 2004 deployed to Iraq.  He was responsible for supporting the infantry by assessing caches, weapons, and improvised explosive devices through route clearances. In December 2004, his Humvee was about 15 minutes outside of Kirkuk Air Base when an IED propelled him from the vehicle resulting in injuries.

He was evacuated and woke up three weeks later at Walter Reed National Military Medical Center from a medically induced coma. His doctors were able to save both of his lower limbs; however, he was missing part of his left calf and had a broken left tibia. Jacobs was not married at the time but his parents were by his side as he spent two years receiving treatment and rehabilitation before medically retiring from the Army in 2006.

Upon returning home to Utah, he enrolled in the University of Utah and graduated in 2012 with a bachelor’s degree in communications.

Due to his injuries sustained while serving, in 2013, his right lower limb was amputated above the knee.

Jacobs now serves as a motivational speaker for companies and schools.

“While serving in the military, many veterans make unimaginable lifelong sacrifices,” said Robin Kelleher, president and CEO of Hope For The Warriors. “It’s an honor for Hope For The Warriors to provide this travel trailer for Spc. Jacobs and his family, allowing them the freedom to get outdoors again. It’s very noble of him to continue to support his fellow military members with the trailer as well.”

Since the program’s inception, A Warrior’s Wish has granted 165 wishes.

Donations are still being accepted to sponsor Jacobs’ wish. For sponsorship and volunteer opportunities for the A Warrior’s Wish program, contact Chrystal Keilers at ckeilers@hopeforthewarriors.org or (832) 776-9379.

To apply for a wish, visit https://www.hopeforthewarriors.org/story/19331538/a-warriors-wish and register online.