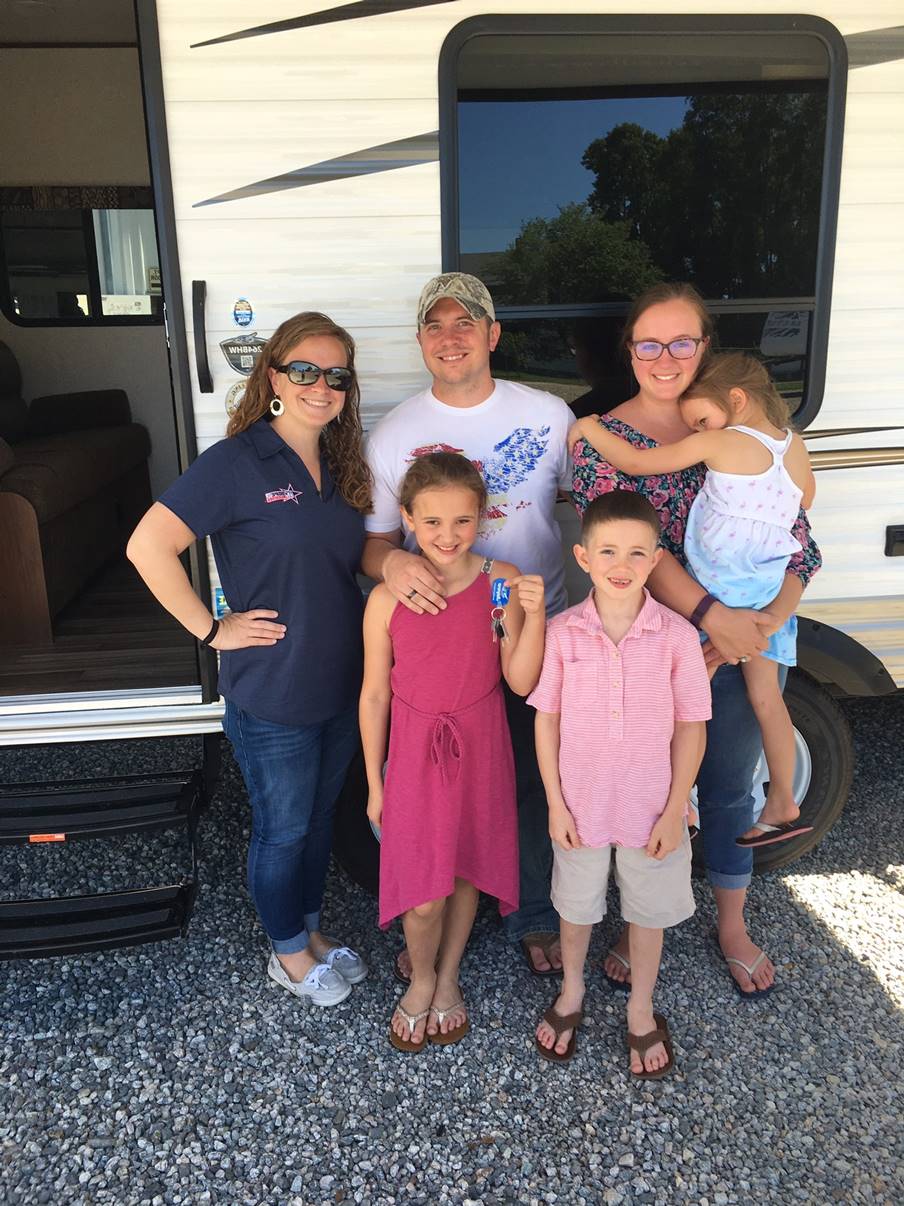 Ashleigh Aungst of Hope For The Warriors with A Warrior’s Wish Recipient, Tristan Brown and family.

CHARLOTTE, N.C. (May 4, 2017) – Since separating from the Army, camping and time outdoors has provided a place of serenity for the father of three and his family, but has become more difficult due to his combat injuries.

A new travel trailer, given to Hampstead-based Army Sergeant Tristan Brown through A Warrior’s Wish® by  Hope For The Warriors®, now provides a more accommodating environment, furnishing him the freedom to camp with his family once again.

“Thanks to Hope For The Warriors I will be able to enjoy the outdoors again with my family,” said Brown. “I am more at peace in the wilderness, allowing me to clear my mind. The flexibility the travel trailer provides will help with the daily, never-ending memories of war that haunt me when I am trapped inside my home.”

In addition to using the travel trailer for family vacations, Brown hopes to pay it forward by taking other veterans camping and assisting with local natural disaster clean up.

“I’m thankful to now have the opportunity to help other veterans by leaving all their chaos and troubles away, even if for just a weekend,” he said.

In 2006, Brown enlisted in the Army and in June 2008 deployed to Baylough, Afghanistan, with the 1st Battalion 4th Infantry Regiment. On Oct. 29, 2008, his squad was tasked with setting up an over-watch position on a mountain top to gather intelligence. Tragically, their Humvee struck an IED and the firefight that followed injured Brown and four of his fellow soldiers.

After spending three years recovering and rehabilitating at Walter Reed National Military Center in Maryland, Brown was honorably discharged from the Army in 2012.

Upon returning home to Montana, he enlisted with the Montana Army National Guard and graduated from the Montana Highway Patrol Academy. However, Brown began having difficulties coping with what he witnessed during war and sought PTSD treatment, officially ending his military and law enforcement careers.

“While serving in the military, many veterans make unimaginable lifelong sacrifices,” said Robin Kelleher, president and CEO of Hope For The Warriors. “We’re excited that this travel trailer will bring some solace to Sgt. Brown, his family and other veterans. A Warrior’s Wish program is the small way we, at Hope For The Warriors, can help military members and their families move along with their civilian lives while thanking them for their incredible service to our country.”

Thanks to the support of Terrell Camping Center, the nonprofit received a price break on the trailer but donations are still being accepted to sponsor the wish.

Since the program’s inception, A Warrior’s Wish has granted 165 wishes.

To apply for a wish, visit https://www.hopeforthewarriors.org/story/19331538/a-warriors-wish and register online.

Founded in 2006, Hope For The Warriors is a national nonprofit dedicated to restoring a sense of self, family and hope for post 9/11 veterans, service members and military families. Since its inception, Hope For The Warriors has served more than 13,000 through a variety of support programs focused on transition, health and wellness, peer engagement and connections to community resources. The nonprofit’s first program, A Warrior’s Wish, has granted 165 wishes to fulfill a desire for a better quality of life or support a quest for gratifying endeavors. In addition, Run For The Warriors has captured the hearts of more than 22,000 since 2010. For more information, visit hopeforthewarriors.org, Facebook or Twitter.