Who Are Our Caregivers?

Who are our caregivers?

At Hope For The Warriors, we recognize that combat injured service members and veterans are supported by a diverse group of special people in their lives who we call “caregivers.” These individuals might provide them with physical support and care to assist them with activities of daily living. Other caregivers may provide those who experience symptoms from the invisible wounds of war with emotional support that assists with their ability to function and navigate the civilian environment throughout the day.

I’ve been working with many caregivers over the past 4 years and I have come to recognize that we have a whole variety of people who can be identified as those who provide care to our combat injured warriors. The Rand Corporation, in their landmark 2013 study identified this military caregiver population as “The Hidden Heroes” and I often marvel at just how accurate that name is. Caregivers often are not recognized for all that they do to support their injured loved ones daily. Often this caregiver is a spouse/partner who is simultaneously raising young children. Spouse/partner caregivers may have to return to employment or embark on employment for the first time to improve the family’s financial stability. Sometimes a caregiver is a parent who has been providing daily care and much-needed advocacy for their own child, as well as all of the other service members and veterans who will follow their child through the system after an injury. I have met children of veterans– young adults—who have put their lives on hold to care for or provide additional support to a parent who is no longer able to function independently after a combat injury.

The 2013 RAND report estimated that there are between 275,000 and one million Americans who are family members, identified as spouses, children and parents, caring for an injured OIF/OEF veteran.[1] In 2010, the National Alliance for Caregiving (NAC) conducted a study that found that 80% of these military caregivers lived with the veteran, 96% were women and forty-one percent were between 18 and 54 years old.[2] 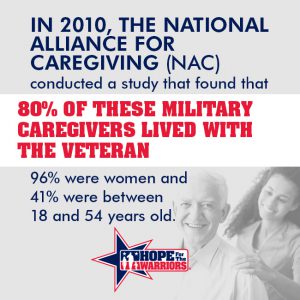 I would say, based on my experience, that the military caregiver population is even higher than these estimates suggest because they do not account for the caregivers who have no familial/marital relationship to the veteran or service member. One particular set of caregivers comes to mind: 2 women who were high school classmates of a veteran’s siblings. When the veteran, who had been diagnosed with a severe TBI, moved back to his hometown, family support was no longer available. As a result, these two women partnered up to provide this veteran with support and care. They take turns managing his VA appointments, medications, and financial needs and assisting him with activities of daily living. I have also worked with caregivers of veterans who are veterans themselves. They’ve made it their mission to continue to be their injured friend’s battle buddy.

Hope For The Warriors provides programming and support services to caregivers of post-9/11 service members and veterans who have been physically or psychologically wounded due to combat. These caregivers can include: spouses/partners, adult children, parents, significant others, siblings, and friends. We maintain this broad definition of the word “caregiver” because we recognize the diversity of this caregiver population and believe that everyone in this role needs our support.

[2] National Alliance for Caregiving. (2010). Caregiving of Veterans—Serving the Homefront: