When United States Army veteran Terrence Young isn’t giving back to his community by speaking to Houston, Texas area high school students about overcoming diversity and mentoring at the juvenile detention center, you can find him shooting his bow. 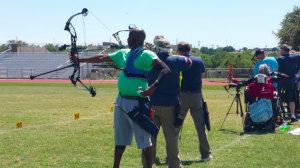 Starting his military career with the U.S. Navy, Young re-enlisted in the U.S. Army in 1998 as a helicopter technician and an equal opportunity advisor. After 9/11 his life, like many others in the military, changed drastically and he began workups to deploy to war. During his training, he injured his left arm and ulnar nerve, requiring surgery. In December of 2013, upon a full recovery, Young found himself shoulder to shoulder with his fellow soldiers on a flight to Afghanistan.

In February 2014, Young was caught off-guard in a base assault. He was caught in the compression blast and thrown into a wall, which caused him to re-injure his left arm and his spinal nerve. He was medically evacuated to the Walter Reed National Military Medical Center and eventually transferred to the Warrior Transition Battalion in Fort Riley, Kansas.

Young now has severe atrophy in his left hand, which left his hand stuck in a “claw position,” due to the loss of fine motor skills and grip. During his medical and mental health rehabilitation, he rediscovered his love of sports and practices to excel.

He was competing on a travel archery team during the time of his second neck surgery, in October 2017. After which, he no longer felt comfortable shoot his bow using his teeth.

Young asked for a wish, through our A Warrior’s Wish program, to receive adaptive archery equipment that will help him continue to shoot at the competitive level. After learning about his wish and goals, we granted him the necessary equipment to support his needs and pursue the passion that gives him HOPE.

Never forgetting the friends he lost that day in 2014, Young strives to honor and respect them through his archery endeavors. Upon receiving his wish, Young let their memory and warrior spirit fuel his drive as he trains to participate in the 2020 Para-Olympics and climb the USA Archery rankings. 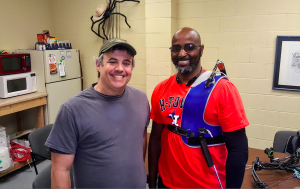