Get the Latest Updates
Facebook0Tweet0LinkedIn0Print0Email0
During Women’s History Month, we are pleased to recognize a very special female Marine as our Volunteer of the Month, who’s servant heart, resilience and drive inspire us each and every day.
Marine Corps Staff Sergeant Amanda Eason, a Motor T operator now Career Planner, joined our HOPE family after she was injured in Afghanistan in 2010 and has been volunteering with HOPE ever since.
Since her beginning days with HOPE, Amanda has made a tremendous impact as a Team Hope For The Warriors member by developing the Team Hope For The Warriors Okinawa chapter and serving as Team Captain. She has represented Team Hope For The Warriors in various ultra-marathons, Marine Corps Historic Half, Marine Corps Marathon, TCS New York City Marathon, Pittsburgh Marathon, Devil Dog 100 and the Run For The Warriors Race Series!
The HOPE she has received through being involved in our programs, Amanda has shared two-fold. She goes above and beyond to encourage her brothers and sisters in arms to become the best versions of themselves and promotes HOPE through sports and recreation by running along-side and achieving goals with them in team races like the Ragnar Relay.
Senior Director of Sports and Recreation, Steve Bartomioli, shares, “Amanda competes with a tenacity and ferocity that sets her well apart from her peers in esprit de corps and personal accomplishment. She maintains a never say die mentality and positive attitude in the face of all adversity.”
Although she has the best cheerleaders and support system of her husband, Geoffrey, and daughter, Elizabeth, we at HOPE are also her biggest fans. We cannot thank Amanda enough for not only her service to our nation, but for her dedication to sharing HOPE and supporting her brothers and sisters in arms and fellow military families. We are so thankful to have Amanda in our HOPE family. 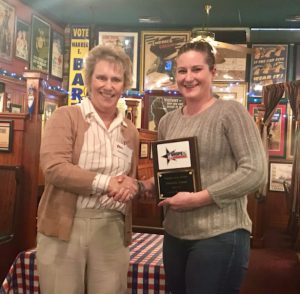