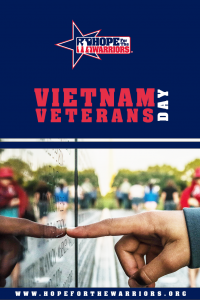 Today, the Department of Veteran Affairs estimates that we are losing nearly 500 Vietnam veterans a day. In a recent Military Times article, “Commentary: For Vietnam veterans, a ‘thank you’ long overdue” Retired United States Army Major General Jim Jackson states, “We must act now to do what should have been done 50 years ago,” and that is to say “thank you.”

Since the end of the war, many Vietnam veterans have chosen to take on a new mission fueled by the desire to support and advocate for those who served next to them on the battlefield and to ensure that today’s warfighters do not experience what they have endured when returning home.

Vietnam veteran and Hope For The Warriors Web and Database Manager Bob Hoeckle shares, “It makes me proud and happy every day knowing that I had some small effect on the ongoing wellbeing of these [post-9/11] warriors. I know, understand and have a lot of empathy for their status. Facing the uncertainty of home politics while putting your life on the line is stressful on both the warriors and their family. I see that the advancements in medical technology have resulted in more warriors surviving what might have been fatal during the Vietnam conflict. That means that the work we do with and for caregivers and family is more important than ever.”

Today, we would like to acknowledge the Vietnam veterans, that are a part of our HOPE family, who have dedicated their post-war life to ensuring that today’s warriors have access to the care and resources needed to restore self, family and HOPE in their lives upon returning home from war.

Harry Bridgwood – In Memoriam – Board of Directors | Served in the United States Marine Corps completing tours of duty in Vietnam.

LTC Bob Myers, USA (Ret) – Board of Directors | Commissioned into the U.S. Army in 1967, served in Vietnam.

Bill Nelson – Board of Directors | Bill Nelson is a served with the 101st Airborne in Vietnam.

Bob Hoeckele – Web/Database Manager | Served in the United States Army as a crew chief and door gunner on Hueys with one tour of duty from 1969- 1970 in Vietnam.

Each and every day, we are thankful for your service and for the sacrifices you have made while serving our nation.

Join us in thanking a Vietnam veteran, not only today but every day.