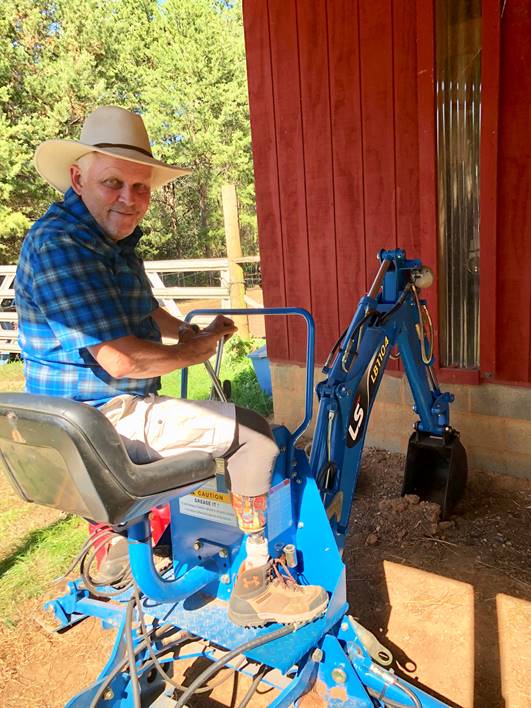 For B-roll (farm and rehab video) and interviews with Army Captain Michael Trost, his wife Stephanie and Hope For The Warriors staff member, Chris Jones visit, https://we.tl/QwzKRiLQ36. All video is available for use.

MARYVILLE, Tenn. (Oct. 25, 2017) – Maryville-based Army Captain Michael Trost received A Warrior’s Wish® of a backhoe from Hope For The Warriors® to aid in his expanding hops farm business.

Since retiring from the Army in 2014, Trost has concentrated on his growing farm and has earned a certificate in Brewing Science. His goal is to use the donated backhoe to grow hops to sell to local micro-breweries and home brewers in the Knoxville, Tenn. area.

“Thanks to Hope For The Warriors, the backhoe I received has further propelled my dream of becoming a commercial hops farmer,” said Trost. “Although I have some limitations, I now live my life by the following motto, ‘It’s not what you don’t have it’s what you do with what you do have.’”

The California native spent 32 years, 20 of which were active-duty, serving in the Army. In July 2011, Trost spent his last deployment in Spin Boldak, Afghanistan. His objective as a civil affairs specialist was to work with the local community in developing infrastructure in the region. On Feb. 20, 2012, he was escorting an aid from the U.S. Agency for International Development when Trost and his team came under fire, killing one U.S. solider and injuring Trost and a fellow corporal.

He was medically evacuated to Walter Reed National Military Medical Center, where he spent 10 months receiving 31 surgeries, to repair the injuries of five gunshot wounds to his lower extremities. In 2014, he medically retired from the Army.

Due to complications from his combat injuries, in April 2016, Trost made the decision to have a below-the-knee amputation on his right leg and was fitted with a prosthetic.

“While serving in the military, many veterans make unimaginable lifelong sacrifices,” said Robin Kelleher, president and CEO of Hope For The Warriors. “Capt. Trost has spent years rehabilitating from his combat injuries, so we’re honored to assist him with this farming equipment, industry connections and transition support so he can now build his business allowing him an easier transition to civilian life.”

Beyond granting Trost’s Wish, Hope For The Warriors took into consideration his long-term career goals and connected him to a brewing industry mentor through one of its partners and to its Career Transition and Education department for follow-up support.

Since the program’s inception, A Warrior’s Wish has granted 169 wishes.

For B-roll (farm and rehab video) and interviews with Army Captain Michael Trost, his wife Stephanie and Hope For The Warriors staff member, Chris Jones visit, https://we.tl/QwzKRiLQ36. All video is available for use.

Founded in 2006, Hope For The Warriors is a national nonprofit dedicated to restoring a sense of self, family and hope for post 9/11 veterans, service members and military families. Since its inception, Hope For The Warriors has served more than 13,000 through a variety of support programs focused on transition, health and wellness, peer engagement and connections to community resources. The nonprofit’s first program, A Warrior’s Wish, has granted 169 wishes to fulfill a desire for a better quality of life or support a quest for gratifying endeavors. In addition, Run For The Warriors has captured the hearts of more than 22,000 since 2010. For more information, visit hopeforthewarriors.org, Facebook or Twitter.