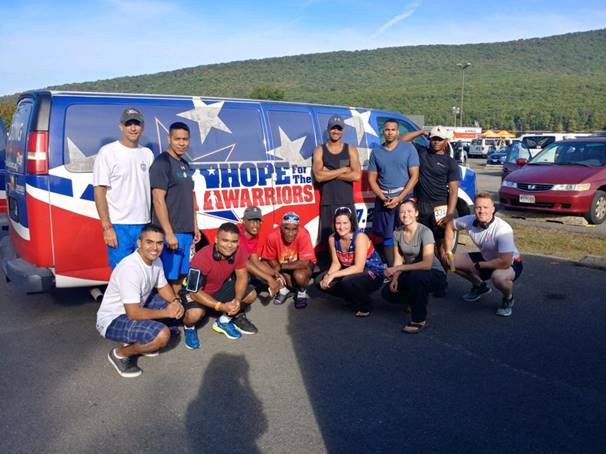 Team Hope For The Warriors before the start of the Reebok Ragnar Washington D.C.

WASHINGTON D.C. (Sept. 28, 2017) – On behalf of Team Hope For The Warriors, two teams of 12 veteran athletes engaged their warrior spirits by completing the Reebok Ragnar Washington D.C. placing 25th out of 50.

The 10th annual relay event pushes teams to conquer a course over two days and one night, pushing their limits while accomplishing a goal together.

Beginning in Cumberland, Maryland, the warrior athletes headed east through thick forest trails and scenic paths. Around nightfall, they ran through the quiet streets of many charming historic Civil War-era towns, ultimately passing within the shadows of the Washington Monument and the Lincoln Memorial.

One of the Hope For The Warriors’ Sports and Recreation programs, Team Hope For The Warriors provides athletes of all abilities the opportunity to engage their competitive spirit at endurance events. Warrior Team members are provided adaptive equipment and race support to ensure that they are defined by their achievements rather than by their injuries, supporting their rehabilitation and mental health, while re-engaging competitive spirts.

Participating Marine veteran Amanda Eason was injured in an 2010 IED explosion in Afghanistan. A member of Team Hope For The Warriors since 2011, she credits the nonprofit for connecting her with other veterans with similar experiences allowing her to relate to them and not feel so alone.

“I owe a lot of my ambition and drive to racing to Hope For The Warriors. Being a part of an organization who creates challenges and opportunities is truly amazing!”

Celebrating more than 11 years of service, Hope For The Warriors assists veterans, service members and military families with a variety of programming including clinical health and wellness, sports and recreation, community and military relations and transition services.

Founded in 2006, Hope For The Warriors is a national nonprofit dedicated to restoring a sense of self, family and hope for post 9/11 veterans, service members and military families. Since its inception, Hope For The Warriors has served more than 13,000 through a variety of support programs focused on transition, health and wellness, peer engagement and connections to community resources. The nonprofit’s first program, A Warrior’s Wish, has granted 168 wishes to fulfill a desire for a better quality of life or support a quest for gratifying endeavors. In addition, Run For The Warriors has captured the hearts of more than 22,000 since 2010. For more information, visit https://www.hopeforthewarriors.org/, Facebook or Twitter.