Team Hope For The Warriors member, Steve Siwulec, who competed in the 10th Annual Long Island Run For The Warriors, shares his story of recovery and of how he is achieving his fitness goals. 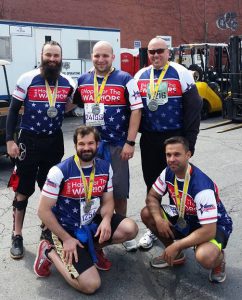 In 2012 at a country concert in Long Island, New York, United States Army veteran, Steve Siwulec approached a Hope For The Warriors booth out of pure curiosity, little did he know that when he walked over to that table, he would end up joining the life-long HOPE family.

Currently serving as a Federal Police Officer, the two-time combat veteran, who deployed to Afghanistan and Iraq, was diagnosed with both physical and mental wounds of war upon his transition from the Army. Despite his injuries, he has never limited himself and has committed his life to health and fitness, competing in ten Run For The Warriors and Team Hope For The Warriors events.

In the winter of 2016, doctors discovered that Steve had a bicuspid aortic valve disease and needed to have open-heart surgery immediately. During this operation on March 6, 2016, the doctors changed their original diagnosis to a unicuspid aortic valve, a rare valve condition, which they were able to repair. During his recovery, Steve’s warrior spirit and determination to run again made him aim high and set a goal to run a half-marathon with Team Hope For The Warriors. 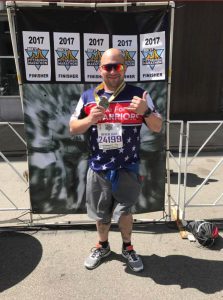 Initially, Steve wanted to compete in the NYC Half-Marathon, but with his first baby due around the marathon date, he chose to take on the Pittsburgh Half Marathon. Steve worked weekly with Steve Bartomioli, Senior Director of Sports and Recreation, to reach his goals of completing two to three runs a week and consistently completing his cycling workout. With his hard work and dedication, Steve was able to complete the Pittsburgh Half Marathon in 2017. Team Hope For The Warriors not only gave him the opportunity to set goals for his physical fitness but also by chatting weekly to assess and restructure his training regiment, it gave him the mental conditioning and motivation he needed to reach his goal.

Steve has always been a passionate athlete, and the challenges that he has faced in his life have only strengthened the warrior that he is today. We are thankful that we can be a part of Steve’s journey and work with him towards his goals.

You can sign up for services or sign up to become a volunteer and become a part of the HOPE family.