Professional Inheritance Within The Military Community

In April, we celebrated the month of the Military Child, and we thanked them for their service because service members don’t serve alone. Military children and family are an essential part of military culture. The fundamental building blocks that make up military culture- service, sacrifice, courage, commitment, honor, integrity, are taught from the very beginning and are an incredibly important part of military life for service members, so important it becomes ingrained in their DNA. 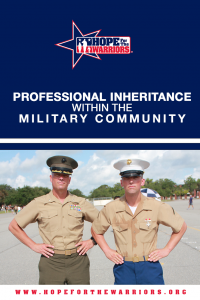 It’s the same, in some respects, for the families and certainly children whose young minds are being shaped by the experiences they have as part of that military culture. It isn’t surprising that,  military children are two times more likely to serve than their civilian counterparts. Read 12 Facts You Didn’t Know About Military Families. When you combine experiences like watching jets fly, moving to new locations, making new friends and seeing military equipment from a young age, with an understanding, appreciation, and respect for service and sacrifice, it’s not hard to see why so many children of military parents strive to fulfill their boots.

Such is the case with the Langford family. John Langford, Senior Director of Transition here at Hope For The Warriors, followed in his father’s footsteps and is now being followed by his own son. John shares his family legacy and professional inheritance among three generations of Langford men. 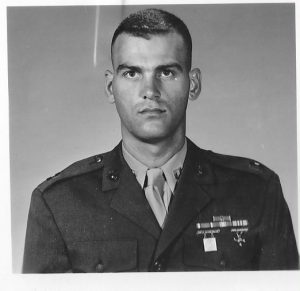 My father, Rob Langford, was commissioned a Marine 2nd Lt in 1961 and served for just over five years, resigning as a captain in 1967.  He was awarded the Bronze Star with combat “V” for valor as a rifle platoon commander in Vietnam.

I was born in Oceanside, CA, while my dad was deployed and we finally met each other when I was a year old.  He returned from Vietnam to serve a tour as a Series Commander at MCRD San Diego before resigning his commission and joining the FBI.

He spent nearly 30 years in the FBI and was directly involved in the Jimmy Hoffa organized crime case. He is also engaged organized crime cases in Michigan, the Atlanta bombing during the 1996 Olympics, and he reopened the famous 16th St. Baptist Church bombing case in Birmingham, AL, from 1963, resulting in the only indictment and prosecution of one of the perpetrators.

My dad was serving in combat when I was born and that had a profound impact on me later in life. 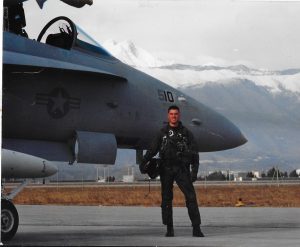 I enlisted in the Marine Corps in 1986 and spent four years in the Reserves as an ejection seat mechanic on the F-4 Phantom as I went through college.  I was commissioned as a Marine 2ndLt in 1990, went to flight school in Pensacola, FL, following The Basic School, and received my Naval Flight Officer wings in 1992.

I trained as an F/A-18D Weapons and Sensors Officer (WSO) in the backseat of the Hornet and reported to MCAS Beaufort in 1994.  I completed two deployments with VMFA(AW)-332 to Aviano, Italy during the Bosnian peacekeeping missions, served a tour at the Marine Corps Warfighting Lab, and then returned to flight status.

I deployed on a WestPac tour with VMFA(AW)-533, training in Iwakuni, Okinawa, and Australia in 2001.  In 2003, I deployed again with the Hawks to Operation IRAQI FREEDOM. I retired in 2009 after 23 years of service.

I came to realize that service to our nation sometimes requires great sacrifice of the family.  I have five children, all who have missed their dad during birthdays, Christmas, Thanksgiving, etc.  I didn’t meet my middle son, now 23, until he was four months old, as I was unable to come home for his birth during my deployment supporting Bosnia peacekeeping missions.

Since my dad resigned his commission two years after I was born, I wasn’t a “military child” per se. When I grew older, I was fascinated by his experience in Vietnam. I was mesmerized by his uniforms and his souvenirs of war, and most importantly, I was impacted by his stories of leading young Marines into combat.

I was struck at an early age by his sacrifice and his patriotism, and it was always something I wanted to emulate.  I was very proud of his service to our country, and I wanted to do the same.  Our service and experiences had the same effect on Daniel. 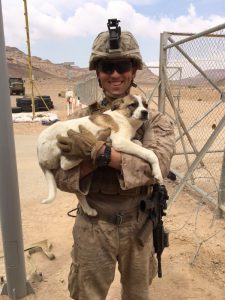 My wife’s father was an Army colonel, and my boys used to dress up in his uniforms.  Military service and patriotism have been a prevalent part of our family, and my son Daniel was moved by all of it since he was very young.

His lifelong ambition has been to become a Marine, and he enlisted in the Marine Corps in 2016.  He graduated as the company honor grad from boot camp at Parris Island, just shy of 30 years to the day that I graduated from the same 3rd Recruit Training Battalion.  Daniel is a Corporal, 0352 Anti-tank Missileman with 2d LAR, currently attached to 2nd Battalion, 6th Marines, and deployed with the 26th MEU.

It’s been far more difficult for me than I imagined it would be to have a son serving as a US Marine.  During my career, I can count the loss of over 40 friends from both training and combat incidents.

Since I’ve been at Hope For The Warriors and have been interacting with young Veterans, I see my son in each one of them, and it’s been hard for me at times to separate that.  But it makes me so much more grateful for the mission of HOPE and so much more motivated to ensure that we’re doing everything we can for our veterans and their families.

John demonstrates the importance of Hope For The Warriors supporting our service members and veterans. By understanding the fundamental building blocks of a service member, the thing that motivates three generations of a single family to serve, we can provide a comprehensive approach to well-being, that accurately addresses the needs of veterans and their families.

We believe in a holistic approach to well-being, impacting many areas of a service member’s life. We are a dynamic and flexible organization that moves to meet the ever-changing needs of the military community.

We understand what it takes to support our nation’s heroes. Donate now to join us in supporting those who serve.