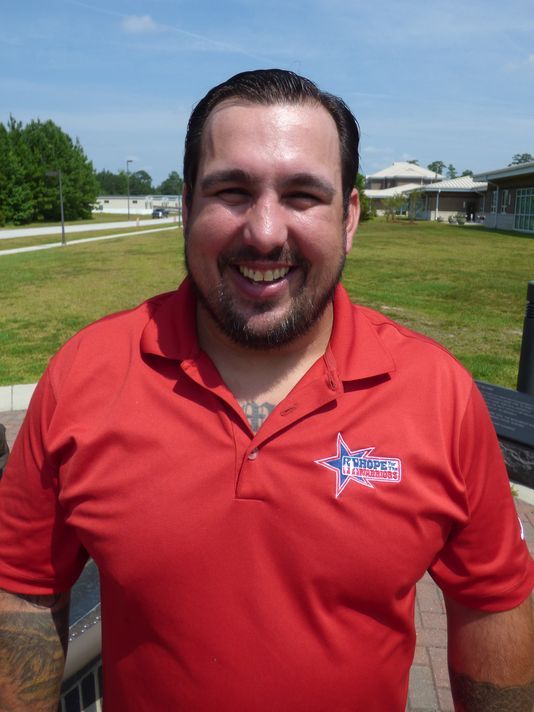 CAMP LEJEUNE, N.C. — The pounding thunder of race cars — ear-splitting and often unsettling to a novice — was nothing new to Ryan Harshman.

He had heard — and felt — much worse in Iraq and Afghanistan while serving in the Marine Corps.

But those engine sounds — and the general chaotic landscape of a NASCAR race — on an event day at Martinsville Speedway were, in an odd way, music to Harshman’s ears. And salve for his wounds.

Harshman, a Marine from 2003 to 2014, was at Martinsville two years ago as part of a program sponsored by Hope for the Warriors, an organization that supports injured and wounded service members, veterans and military families. It was his first race with Hope, but he’s been to several since.

The Hope organization has developed programs aimed at assisting injured service members in recovery, rehabilitation and either a return to military service or transition into civilian life. Several NASCAR drivers and teams have been active with the group in hosting military members at tracks and race shops.

Harshman, a Maryland native now living in Swansboro, N.C., near Camp Lejeune, served in the Middle East during five deployments. He suffered 11 concussions, one caused by a blast from an improvised explosive device during an operation in Fallujah, Iraq. He saw a promising military career dissolve in a series of hospitalizations, battles with alcohol and the effects of Post Traumatic Stress Disorder and struggles with concerns about his long-term future and that of his family.

Hope for the Warriors came to the rescue, offering Harshman, who is medically retired from the Marines, a supportive bridge from the military life he once knew to stability in civilian life for him and his family — wife Maggie, daughter Natalie and son Liam.

And the NASCAR landscape played a role. 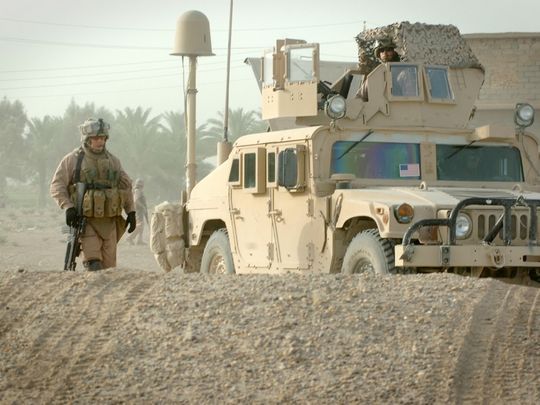 “For so many of our service members, NASCAR is a part of their history and their growing up,” Robin Kelleher, Hope for the Warriors president, told USA TODAY Sports. “We look at those elements of what makes a person fulfilled and whole so that we can provide those opportunities in their healing process.

“NASCAR events can be very organically therapeutic. If you can challenge somebody’s hesitations by putting them in an environment like that where they’re very excited to be there, it helps. They are distracted from the chaos, but the chaos is actually helping to ease the PTSD and the noise issues and so forth.”

Hope’s work stretches across the service member’s family structure. Last This spring, Liam won a contest to design a paint scheme for the race car of Xfinity Series driver Brandon Jones, who has become friends with the Harshman family.

“I could recognize some of his mannerisms right away,” Harshman told USA TODAY Sports. “He was covering up, avoiding people. But then he started to open up. Within a few hours, he went from being this reclusive individual to talking to NASCAR drivers and their families and random civilians at the track. Now he loves NASCAR. That’s his outlet.”

Among NASCAR notables who have been involved with Hope and its programs are drivers Brad Keselowski and Ryan Newman, team owner Richard Childress, Samantha Busch (wife of driver Kyle Busch) and former driver Mike Skinner and his wife, Angie.

“I’ve always been interested in the military, and I had a lot of questions about his (Harshman’s) experience and he was happy to answer them, and we had a great conversation,” Jones told USA TODAY Sports. 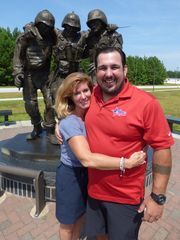 Ryan Harshman and Hope for the Warriors president Robin Kelleher at the ‘No Man Left Behind’ sculpture at Camp Lejeune. (Photo: Mike Hembree for USA TODAY Sports)

Jones has been involved in several Hope programs at speedways and on military bases. He has driven tanks, shot sniper rifles and watched military units in training. He also has visited numerous wounded warriors.

“It’s tough,” he said. “It’s a side you don’t want to see. They take that risk with that line of work. It’s crazy to think that someone does that for us. I just thank them. They’ve sacrificed for us.”

Harshman said military members see something of themselves as they watch NASCAR teams work.

“You don’t even have to like racing, but when you see a team and the crew chief during a race being in constant communication and making big decisions in just seconds, you can relate to what we do,” he said. “It’s how the structure works; there are consequences with every decision.”

Harshman works at an outdoor equipment store as a bow technician and instructor, but he retains an interest in all things related to the Marines and in supporting the work of the Hope organization. He has experienced the entire spectrum of military service, from the exhilaration of reaching goals with other members of his units to the depths of seeing the bodies of friends brought home to the United States and buried at Arlington National Cemetery.

Harshman is a Marine through and through, fluent in what he calls “jarhead jargon.” He is a walking advertisement for the military with an array of military tattoos.

He returned to active duty after suffering concussions but had a seizure while showering in 2012 and sought more aggressive help. Among the key components to recovery, Harshman said, is interaction with Marines who face similar trials.

“Hope helps with that,” Harshman said. “It’s not an organization. It’s a family. Everybody in the service has had different experiences, but we can all conquer our problems with the same passion and by talking to each other. You can see the compassion in the other guy’s eyes.”