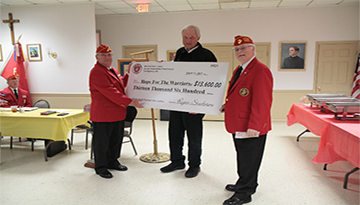 GREENSBORO, N.C. (April 4, 2017) – The Marine Corps League Greater Greensboro Detachment 260 raised more than $13,000 through its annual Hope For The Warriors golf tournament benefiting Hope For The Warriors, a national nonprofit dedicated to restoring a sense of self, family and hope for veterans, service members and military families.

Each year, the one-day golf tournament is played at Grandover Resort in Greensboro with the support of local businesses and detachment members.

In 9 years, the tournament has raised more than $90,000 to benefit various Marine support programs.

Celebrating more than 10 years of service, Hope For The Warriors assists veterans, service members and military families with a variety of programming including clinical health and wellness, sports and recreation, community and military relations and transition services.

“When Hope For The Warriors started more than a decade ago, we dreamed of organizations like the Marine Corps League Greater Greensboro Detachment 260 raised supporting our initiatives,” said Robin Kelleher, co-founder and president of the nonprofit organization. “Most importantly, the MCL of Greater Greensboro is truly impacting the well-being of the many veterans, service members and families who have bravely served and sacrificed for our country.”

Hope For The Warriors

Detachment 260 of the Marine Corps League was founded in September 1972 by 32 charter members. The founding Commandant was Bill Moss who, to this day, still actively serves as an advisor to the current staff and members. In 2005 the detachment was nicknamed “The Fighting 260” reason being the 260 has members who have served in every conflict that the Marines have participated in since WWII. We have members who served in every conflict of WWII, Korea, Vietnam, The Gulf and most all expeditionary missions of the Corps.

Today the 260 is experiencing continued growth. Most of our success is due to the many members that band together to not only help each other but work together to help the community through the many successful programs we promote. “Once a Marine always a Marine” is a standard we all know is true!

Founded in 2006, Hope For The Warriors is a national nonprofit dedicated to restoring a sense of self, family and hope for post 9/11 veterans, service members and military families. Since its inception, Hope For The Warriors has served approximately 10,000 through a variety of support programs focused on transition, health and wellness, peer engagement and connections to community resources. The nonprofit’s first program, A Warrior’s Wish, has granted 162 wishes to fulfill a desire for a better quality of life or support a quest for gratifying endeavors. In addition, Run For The Warriors has captured the hearts of more than 22,000 since 2010. For more information, visit hopeforthewarriors.org, Facebook or Twitter.