Little Does He Know… 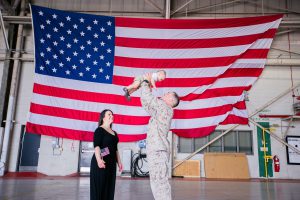 Little does he know…

Right now this world is a crazy and it has been long before he was born.

That his dad has a pretty important job and that he, at a month old, made a big sacrifice early on that September morning saying, “See you later” to his dad for the next 7 months.

Little does he know this will be just the first of many, “see you laters.”

He was born into a military family, a family much bigger than our little family of 3, but of over 1.4 million.

He’s been given the title “military brat” and is just one of the 2 million young warriors who have had one or both of their parents deployed since 2001.

Little does he know he will potentially live somewhere new, not just in the United States, but anywhere in the world, every 2 to 3 years.

He will change schools between 6 to 9 times before he even graduates high school.

He will never be alone, but will always have someone to experience the growing pains of military life with.

At a young age he will realize that home isn’t a place but a feeling.

Even though sometimes things are going to be really hard, he has a world of opportunity and countless resources at his fingertips that his civilian counterparts don’t have.

Little does he know that his little smile gave his mother hope that things will be okay when Murphy’s Law of Deployment took over.

His experiences over the next decade and the pride that will be instilled within him will make him 2x more likely to follow in his dad’s footsteps and serve his country compared to his civilian counterparts.

Little does he know how strong and resilient he truly is and will become.

Little does he know…