HOPE In The Face Of Adversity

“To have and to hold from this day forward, for better, for worse, for richer, for poorer, in sickness and in health, to love and to cherish, till death do us do part,” vows that bine one’s marriage. When you’re young and newly married, the reality of sickness or death is an unacknowledged fear that hides in the back of our minds.

Yet during their “honeymoon years,” John and Colleen’s love was tested on three separate occasions- combat injury, a train accident, and cancer. But they proved that true love always prevails. In the story below, they share their journey of exchanging caregiver roles as they overcame their worst fears and life’s toughest challenges together.

HOPE in the Face of Adversity:

John and I met at Camp Lejeune. I was in undergrad in New Jersey and my friend wanted to visit her fiancé before he deployed. I drove her to North Carolina and we went out with her fiancé and his buddies, including John.

We hit it off right away and when he left for Iraq the following week, we wrote letters and talked on the phone (when he was able) for the duration of his deployment. When we returned we realized that we wanted to make a commitment.

We dated while he was at Lejeune, in recruiter’s school in California and while he recruited in New York. By this time, I was in grad school in New York so we were the closest, geographically, that we had ever been. After dating for 5 years, we got engaged right before he left to go back to Camp Lejeune. 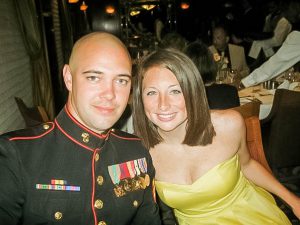 Once John returned to Camp Lejeune, he immediately began prepping for a deployment to Afghanistan. In the midst of this preparation, we got married at the courthouse while we planned a big wedding celebration for when he returned.

I stayed in New Jersey throughout his deployment to work and be with my family since I wouldn’t be moving to North Carolina until when John returned. Except, John’s stateside return was not what we were expecting.

Instead of prepping a welcome home sign, picking out the perfect outfit, buying streamers and dreaming about the incredible feeling of embracing him after a long hard time away I was packing my bags, making phone calls and trying to stay positive.

I received a phone call on May 15, 2010, that John was involved in an explosion and he was “stable but critical.” There was little information at that time. I had the best time experience with the Marine Corps, especially the family liaison, but all I could do was wait.

This Jersey girl flew to San Antonio, Texas, not knowing what to expect. I was so conflicted. He would be home and safe which was a small relief but I was so unsure of what was to come.

John was burned on 20% of his face, he lost vision in one of his eyes, suffered extensive breaks in the bone of his arm, face, and hip and busted both of his eardrums. His jaw was wired shut for months, he received a skin graft on his arm and bone grafts in his mouth, had needles poked in his eyes and spent countless nights in surgery. 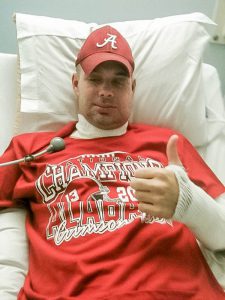 Our first night living together as a married couple was in the hospital. Luckily, John’s incredible spirit and resiliency were always shining through. Our very particular sense of humor and deep love for each other has gotten us through very uncertain times.

He still talks about how terrifying it was for me to shave his head in those early days but we laughed through the very strange life we had ahead of us. We truly had no idea what we were doing but there seemed to be some unspoken rule that this wasn’t going to break us and we were determined to find the humor.

Of course, there were many dark days of tears and mourning for the life we had planned. We pushed away from each other at times but, thankfully have always come back seemingly stronger than before.

Recovery was a long road and continues to be a struggle. Once he conquered the pain, surgeries and found his “new normal” we found that everything was anything but normal. With poor depth perception, and continued pain, John could not PT the way he had as a Marine.

He also missed the incredible comradery that comes with being a Marine. As a “wounded warrior” John’s main job was to heal but as a hard-headed and dedicated Marine with a strong sense of duty he wanted more. This is when Hope For The Warriors entered our lives and gave us more. 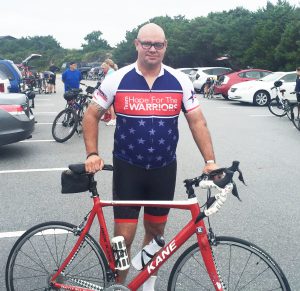 HOPE provided a recumbent bike that John could ride. I don’t think we realized what an incredible impact this gift would have on our lives. John had a place to put his energy and focus. He had an outlet for both his physical and emotional recovery.

He joined a network of like-minded injured service members and became close to so many of the amazing staff members that make Hope For The Warriors so special. Our connection with HOPE did not stop there. They continued to support John by funding cycling races and as went through additional difficulties.

In November 2012, a few months before we were to move back to North Carolina, where John was going to re-join the fleet, we were in an accident. As a part of a weekend honoring wounded warriors and their spouses, John and I participated in a parade in Midland, TX.

During this parade, our parade float was hit by a train. Four incredible warriors lost their lives that day. We inexplicably survived. John possibly had a broken wrist (they could not tell from x-rays due to shrapnel and previous injuries) and I had a fractured collarbone, elbow and sacrum (bottom of the spine).

At this time, I needed a walker to move and was non-weight-bearing through my foot and arm. The tables had turned. I needed to be taken care of. John was incredible. Looking back at that time I feel like I learned a lot about him and myself.

When I was the caregiver, I realized that I was giving the care that I would want: emotional and overly supportive. I supported him but always asked if he needed a break, wanted help or needed more for me.

As my caregiver, he provided me with the care that he wanted: supportive, encouraging and pushing me to meet goals and increase my independence. While I received his support as callous at times, he received my support as smothering.

This was an interesting realization and one that only hindsight could provide. Our ability to find the humor in the darkness continued. John decorated my walker with a mustache and Sponge Bob duct tape, affixed a horn, deer mount and a light.

“It gave me a newfound respect of what caregivers do every day, and I believe it made our relationship stronger.” – John Rose

Once we healed and returned to North Carolina our connection with Hope strengthened. John and I attended charity golf events and John’s favorite afternoon activity was stopping by the Hope office aboard Camp Lejeune to laugh with the staff members.

After a few years of finding our footing and learning to live outside of a crisis, we found ourselves, yet again, in the familiar caregiver/caregiver dynamic. I was diagnosed with stage 2 breast cancer. 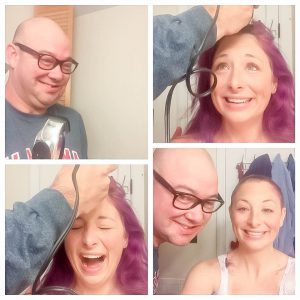 At the time we were hoping to start a family. This dream of ours had to be put on hold while I had a double mastectomy and underwent chemotherapy. My doctors recommended freezing embryos before chemo in case the medication took away my fertility.

After so many years of recovery, building ourselves back and intermittently working, we had no idea how we were going to pay the thousands of dollars to make sure we could have the family we’ve always dreamed of. It is difficult to keep a rainy-day fund when you always find yourself stuck in a monsoon.

Once again, we turned to our Hope For The Warriors family. Asking for help is a tough thing to do, especially when your nature is to be the one helping. One of the unique characteristics of HOPE is that we have never felt like a burden and we have always felt as comfortable as possible reaching out and asking for help.

Thanks to a very generous donation, we now have hope to have our own little warrior(s) one day. While I don’t see myself as an expert, I have learned a few things along our journey that I would like to share with other caregivers. 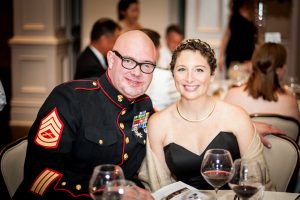 As I reflect on our journey and the moments of sad tears, frustration, happy tears, milestone celebrations and setbacks.  Here are six things we’ve learned, and I hope these tips will help you…

We currently reside in Virginia where John is an Active Duty Marine working for Congressman Duncan Hunter as a DOD Fellow for one year. We are so thankful to be a HOPE family, and we can’t wait for you to join us. You can apply for services, volunteer or donate right now and become a part of the HOPE family for life.

Colleen Rose was born and raised in New Jersey. She received a bachelor’s degree in developmental psychology from The College of New Jersey and a master’s degree in Occupational Therapy from Columbia University. She has had the pleasure of working with the toughest kiddos aged 0-21 years old in their homes, at school and private therapy clinics in NJ, TX, NC and now VA.