Five veterans and military family members to be recognized for their demonstration of hope, receive the Vigiano Family Hope and Courage Award

ARLINGTON, Va. (September 28, 2017) – Hope For The Warriors hosted their eighth annual gala event, the Got Heart Give Hope Gala on Wednesday evening at the Army Navy Country Club in Arlington, Va. Featuring the theme “Faces of Hope,” the gala represented the lives of the veterans, service members, military families, families of the fallen and caregivers that Hope For The Warriors’ programs impact daily. The event celebrated the many ways that the military families find restoration, while highlighting the countless programs offered by Hope For The Warriors that address the wellbeing of the entire family–including transition services, clinical health and wellness, and sports and recreation. To honor the diverse faces of hope, the evening also featured the annual Hope and Courage Awards, where five individuals, including military heroes, caregivers and Gold Star families, were recognized for their embodiment of the essence of self, family and hope.
“The 2017 Vigiano Family Hope & Courage Award Honorees represent the courage and successes of our service members and military families,” said Robin Kelleher, co-founder and CEO for Hope For The Warriors. “These recipients symbolize hope and courage in our communities and across our nation, they are true American heroes.  It was our honor to present them with these awards and highlight their service and sacrifices and hopefully inspire others.”
Since 2010, the Hope and Courage Awards have been presented to service members and military family members who have demonstrated both hope and courage in the face of extraordinary circumstances. Named in honor of the Vigiano family, Captain John Vigiano, Sr., retired FDNY, and his wife, Jan, gave both of their sons on 9/11-one served as a fire fighter and the other served as a police officer in New York City. Sharing their own unique face of hope since the 9/11 tragedy, the Vigiano family has continued to serve by supporting service members and military families. 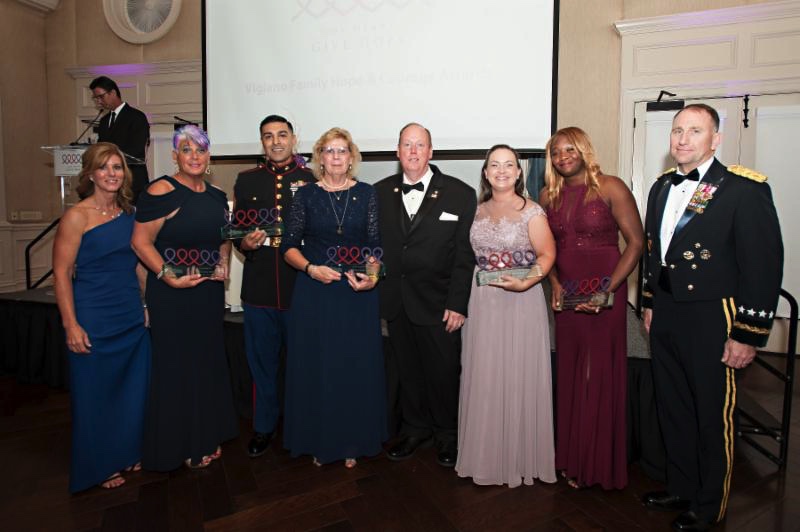