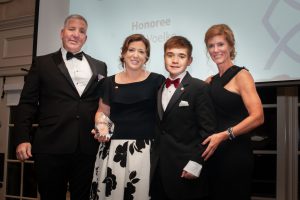 Gold Star wife Traci Voelke, the surviving spouse of her high school sweetheart, the late Major Paul C. Voelke, USA (KIA), who was killed in Mazar Sharif, Afghanistan, after his fifth deployment overseas in 2012 was named a recipient of the Vigiano Family Hope and Courage Award at the ninth annual Got Heart Give Hope gala.

Trained as a lawyer with licenses to practice in Georgia, New York, Washington, D.C., and Virginia, Traci turned to her education in an effort to serve the military community after the death of her husband. First joining the civilian force at the Staff Judge Advocate, 3rd Infantry Division at Fort Stewart, Ga., and later the Office of the Staff Judge Advocate at Ft. Belvoir, Va., Traci serves as legal counsel for service members and their families, veterans, retirees and Gold Star families. In 2017, she received the American Bar Association award for Distinguished Service from the Legal Assistance for Military Personnel Committee for her work with families obtaining court-ordered guardianships for disabled children reaching the age of majority.

In addition to her work responsibilities, Traci also assists surviving families with legal matters, including benefit selection. She is a board member and the Survivor Outreach Coordinator for the 98 Fund, a West Point-based non-profit helping veterans and surviving families. In 2018, Traci was selected for the Survivor Advisory Working Group for the Chief of Staff of the Army and advises the Chief on issues affecting military survivors.