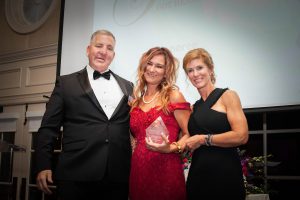 Gold Star wife Kristine “Krissy” Stewart was honored with a Vigiano Family Hope and Courage award for her support of her fellow military families and demonstration of resilience and courage as the surviving spouse of the late Staff Sergeant David Stewart, USMC (KIA), who was killed in 2014 in Afghanistan, during his fifth combat tour.

Krissy served as the Family Readiness Trainer for Marine Corps Recruit Depot Parris Island (MCRDPI) and the Eastern Recruiting Region (ERR), as the subject matter expert for the unit, personal and family readiness program (UPFRP). Today, she’s pursuing her Master’s degree in human services counseling, with a military resiliency, community care and counseling cognate. She is also an event coordinator for Military Wives Connect in her community.

A mother of two, Krissy joined Hope For The Warriors with her children McKenzie and Marshall, who were just ages two and one at the time of their father’s death, at the 2018 Coca-Cola 600 Miles of Remembrance, a NASCAR race in Charlotte, N.C. over Memorial Day weekend. The family was able to see the name of SSgt Stewart on the windshield of a race car, as they celebrated his life and honored his service while keeping his memory alive. 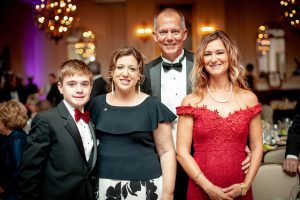