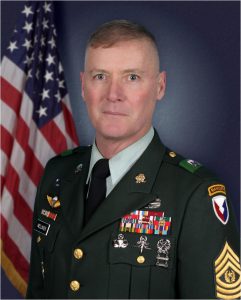 Command Sergeant Major Jeff Mellinger, a veteran of the United States Army was named a recipient of the Vigiano Family Hope and Courage award for his long-time service to our nation.

The son of a U.S. Marine, CSM Mellinger was drafted into the Army in 1972. Throughout his nearly 40-year career, he made over 3,700 jumps with 33 hours in freefall and countless deployments. He completed airborne training at Fort Benning, Ga., and his first assignment was as a unit clerk in Germany, before being assigned to the 2nd Ranger Battalion. Spending 33 months in Iraq, Mellinger’s convoys hit 27 roadside bombs, and of course, he sustained related injuries. Previously assigned to the U.S. Army Alaska, Mellinger spent many months speaking to units and groups about his experiences in Iraq. In 2007, he became the U.S. Army Materiel Command’s Command Sergeant Major, a position he held until his retirement on 31 December 2011. Mellinger’s awards include Defense Superior Service Medal, Legion of Merit (2d award), Bronze Star Medal (V), among others. 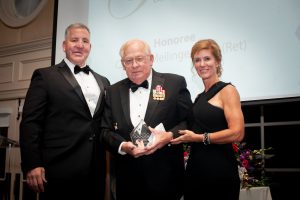