Get the Latest Updates
Facebook0Tweet0LinkedIn0Print0Email0
During his deployments to Afghanistan, Leary saw things he could never unsee. His fellow service members and civilians entered his operating room severely wounded, and some, after the surgical team worked tirelessly to save them, unfortunately returned home in a flag draped coffin. These experiences continued to haunt him after his return home and he was diagnosed with post-traumatic stress disorder. 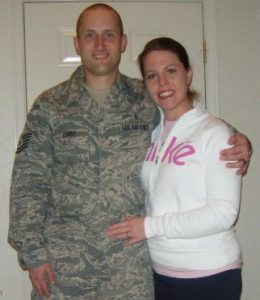 Josh Leary and his wife and caregiver, Glenda Leary

In 2010, during his second deployment to Afghanistan, Leary was rattled by a mortar while cleaning the operating room after a patient. He hit his head and was knocked unconscious. Later, he learned that the base fell under attack by the Taliban. The incident resulted in a mild traumatic brain injury and chronic post-traumatic headaches.

After being medicated from Afghanistan and many different hospital stays, Leary was on the road to recovery at Fort Hood. Leary struggled with his medical conditions that affected his vision, cognitive and physical abilities leading him to have suicidal ideations.  He received immediate intensive care, and his wife, Glenda, worked as a caregiver and helped both Josh and his family through the hardest times.
In 2011, Leary moved with his family back to Charlestown, Indiana, where he was placed on temporary retirement. He was able to seek medical treatment during this time, and permanently retired from the military in 2013, where he and Glenda became actively involved with Hope For The Warriors.
After seeking medical treatment, Leary discovered the physical and mental benefits that archery brought. Over the past few years, he has been participating in adaptive sports and archery events, using a borrowed bow. Leary discovered HOPE with Hope For The Warriors and A Warrior’s Wish program. His wish was…
Part 2: Restoring HOPE will be shared Friday, July 20th.

Learn more about A Warrior’s Wish and you can apply for a 2019 wish or donate to support future wishes- Click here!