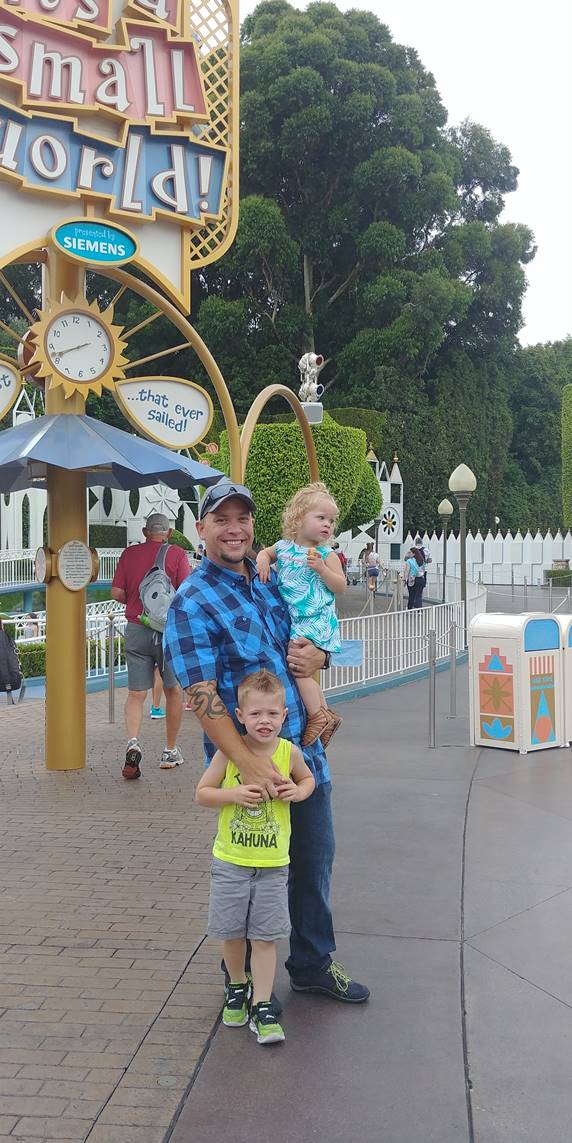 Looking to reconnect and recharge with his family, the stay-at-home, veteran dad requested a Disneyland vacation where he spent one of his most memorable childhood experiences.

“I am beyond thankful for this wonderful opportunity presented to me from Hope For The Warriors that it’s hard to put into words,” said Drake. “When I was told that my wish was coming true I couldn’t believe it. But seeing my kids’ eyes light up when we told them where we were going at the airport, was worth it alone. Each day brought new and exciting memories, from dinner with Mickey to exciting roller coasters, my kids were in heaven.”

Drake served four years in the Army followed by an additional 18 months in the Army National Guard serving two, one-year, deployments in Iraq. In 2005, four months into his second deployment, Drake and his unit were conducting missions in Karbala when an IED hit the Humvee behind the tank he was in resulting in self-blame for the accident.

Shortly after, his regiment’s continued IED patrols and direct combat firefights were resulting in more causalities amongst his fellow soldiers adding to his feelings of self-blame and guilt.

Upon returning from deployment, Drake began to experience flashbacks, zoning out, disturbed and interrupted sleep, and frustration with loud noises. He began treatment services in June 2013 and continues to regularly attend sessions to improve his PTSD and depression.

“When serving in the military, extended family vacations aren’t the norm due to time restraints, deployments and finances,” said Robin Kelleher, president and CEO of Hope For The Warriors. “We’re honored to have provided Sgt. Drake the opportunity to relax, recharge and create new memories with his family.”

Since the program’s inception, A Warrior’s Wish has granted 167 wishes.

Founded in 2006, Hope For The Warriors is a national nonprofit dedicated to restoring a sense of self, family and hope for post 9/11 veterans, service members and military families. Since its inception, Hope For The Warriors has served more than 10,000 through a variety of support programs focused on transition, health and wellness, peer engagement and connections to community resources. The nonprofit’s first program, A Warrior’s Wish, has granted 167 wishes to fulfill a desire for a better quality of life or support a quest for gratifying endeavors. In addition, Run For The Warriors has captured the hearts of more than 22,000 since 2010. For more information, visit hopeforthewarriors.org, Facebook or Twitter.