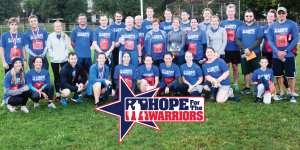 On Sunday, October 14, the 9th Annual American Society of Anesthesiologists (ASA) sponsored Run For The Warriors race will be taking place at Mission Creek Park in San Francisco in conjunction with the annual ASA conference.

Among the many teams of anesthesiologists from all over the country running to honor our nation’s heroes is Duke Anesthesiology, who has been participating for the last eight years. Since 2016, their team has raised more than $19,000 for our mission and has contributed to the more than $306,000 that ASA teams have raised since 2012. 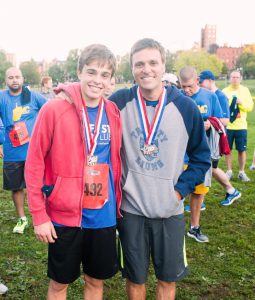 Dr. Barbeito (Right) and his son, Jose at the 8th Annual ASA Run For The Warriors in Boston. Photo courtesy of Duke Anesthesiology

Dr. Atilio Barbeito, chief of Duke Anesthesiology’s Veterans Affairs Anesthesiology Service Division, who medaled along with his son, Jose, at last year’s race in Boston, shares why this race and cause is important to their department.

“Our military and veterans are examples of virtue, because they live the values that make this country great. These individuals have placed liberty and justice above their own comfort and safety, and they have done it on behalf of the entire country. I think this is worthy of celebration and admiration. For those of us who work with veterans daily, we feel this race is OUR race. It is directly connected to our mission of serving “those who have borne the battle.”

Although Dr. Barbeito will be cheering his team on from North Carolina this year, he shares, “I want to thank Duke Anesthesiology and our chairman for allowing us to bring world-class care to those who have served. Through their support and leadership, we are able to bring cutting-edge, high-quality perioperative and pain management care to all veterans in our area.” 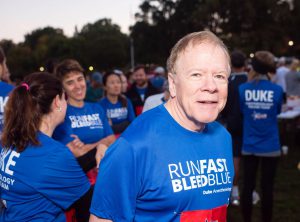 A long-time participant in this race is Dr. Richard Moon of Duke Anesthesiology, who shares his excitement to run with colleagues, new and old, in support of veterans and military families. When asked why this cause is important to him and his team he shares, “It’s actually a question that shouldn’t need an answer. We have a volunteer Army, Navy, Air Force, Marines and Coast Guard—a tiny proportion of the U.S. population. They deserve our support.”

We would like to extend our sincerest thank you to Duke Anesthesiology for their continuous support of our mission to restore self, family and HOPE through the Run For The Warriors race series! Good luck!

Click here to donate in support of Team Duke Anesthesiology.

9th Annual ASA Run For The Warriors Race Info Below:

Opening ceremony and race start at 7:00 AM

Registration to run, walk or volunteer!