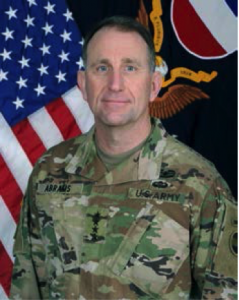 It is our utmost honor to have General Abrams as the 2017 Got Heart Give Hope Gala® Keynote Speaker.

An Armored Cavalryman, General Abrams earned his commission from the United States Military Academy in 1982.  Following the Armor officer basic course, he spent his formative years in a Division Cavalry Squadron with a mission on the East-West German border. He has commanded at every level from Company through Division, and led units in combat operations in Saudi Arabia, Kuwait, Iraq and Afghanistan. General Abrams has extensive combined arms and joint experience.  Duty with warfighting units include: 3rd Armored Division; 1st Cavalry Division (three tours); 3rd Infantry Division; and the 3rd Armored Cavalry Regiment. He also commanded the Army’s National Training Center at Fort Irwin, California. His joint experience includes serving as a strategic war planner for the Chairman, Joint Chiefs of Staff; and as Director of the Joint Center of Excellence for Improvised Explosive Device Defeat. Prior to his current command, he was the Senior Military Assistant to the Secretary of Defense.

Happily married, he and his wife are proud parents of two children and grandparents to one granddaughter. His newest canine companion is “Ace,” a recently retired military bomb dog. A functional fitness enthusiast who also enjoys golf. Follows college basketball closely and gets March Madness annually; and remains an ever optimistic fan of the Washington Redskins and the Army football team.

The Hope For The Warriors® Got Heart Give Hope Gala® is an intimate, Black-Tie event honoring service members and their families and their remarkable stories of recovery and achievement.

On September 27, 2017, Hope For The Warriors will host the Eighth Annual Got Heart Give Hope Gala at The Army Navy Club in Arlington, VA. This Black-Tie event will feature keynote speaker General Robert B. Abrams, the 22nd Commander of United States Army Forces Command, and emceed by Rick Allen, NBC sportscaster. Throughout the evening we will enjoy a cocktail reception, seated dinner, impactful speakers and most importantly the Vigiano Family Hope & Courage Awards. The Vigiano Family Hope & Courage Award recipients represent outstanding examples of selfless acts of service inspiring hope and demonstrating extraordinary courage. These military heroes embody the essence of self, family and Hope.

Got Heart Give Hope Gala® tickets and details can be found at http://www.gotheartgivehope.org.