“The meaning of life is to find your gift.

The purpose of life is to give it away.”

On March 20th, 2017 US Army veteran Joshua Hamilton sat down at a painting class with his friends from a veteran support group. He stared at a blank canvas with the silhouette of a soldier carrying a ruck and rifle slung across his body. A silhouette of him just a few short years ago. Even though the canvas was blank, his mind surely wasn’t.

After medically retiring from the US Army in 2011, Joshua attended the Motorcycle Mechanics Institute in Phoenix, AZ and then moved back to the Pensacola, FL area. One would assume being in a familiar setting surrounded by family and friends that Josh would feel at peace as he started a new and rewarding life. The assumption is far from the truth and the emotions that lay under Josh’s exterior. Serving two tours as a Joint Node Network Operator in Iraq took a distinctive emotional and physical toll that few can relate to. Combining his combat experience with his new life stateside left Josh feeling hopeless and alone. Instead of taking his life, which he felt at the time was the answer and the conclusion of a solution to his pain, Josh reached into his soul for the same characteristic that allowed him to deploy into a combat theatre, Courage. Josh realized at this crucial moment that his life was not over, and he called a friend to take him to the hospital and admitted himself for treatment. It was then he made an oath to himself, not unlike the oath he took to defend our country and swore to never intentionally hurt himself again. Josh realized that the same family and friends that surrounded him now would be the ones that would hurt. He took the courageous act to find a way to keep living.

Just like the scars he sustained during life and at war, he chose a tattoo to tell his story. Four years later and still struggling with having ideations, he had the (I Got Your Six) IGY6 tattooed on his forearm as a visible reminder of the promise. 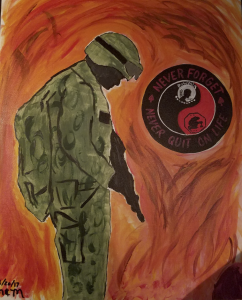 As a person who turned to art to express himself, performing over 127 shows with the Soldier Show around the country and world, designing tattoos, engaging in culinary arts—he sat there staring at the blank canvas and silhouette indecisive on what to do. Finally, while everyone followed the instructor, he chose to let his heart and mind guide the brush. Picking the colors red, orange, white, and brown, he began to paint. First, he started with the red and orange flames that engulfed the soldier. He then started on a yin-yang symbol with one-half the POW/MIA icon and the other half being Operation Zero’s logo to acknowledge the veteran suicide rate and advocate for their mission to make 22 turn into zero. Surrounding the yin-yang are the words “Never Forget” and “Never Give Up.” Once he finished painting, he realized that he was the last person in the room and the studio stayed open longer for him to finish. Leaving with what he felt was an unfinished piece; he headed home not looking at what he had created.

The next day, Joshua finally looked at his art and appreciated his masterpiece for the first time. Reflecting on his painting, he recognized that the flames surround the soldier portrayed the hell and tournament one goes through that can lead to taking their own life. It represented how Joshua felt in 2013, stuck in a “fiery hell,” alone with no place to go. The POW/MIA symbol that he put in the yin-yang is imagery that he uses as a daily reminder “to keep pushing” for his brother and sister in arms that are not with us today. The Operation Zero logo is a patch that he wears on his motorcycle vest to show his support of their mission. Placing the yin-yang eye level to the soldier indicates that he/she has a future full of HOPE because they are in a military and veteran community that cares about them and can help them get the help they need. Joshua hopes that when his fellow veterans see his artwork and story that they too will choose to not to quit on life.