Month of the Military Child | DMACC Students Share “Why Hope For The Warriors?”

Some of life’s hardest questions start with the word WHY?

Just ask a military child. They get those all the time:

But they were able to turn the WHY around during the final project for their Fundamentals of Oral Communication class. They asked their classmates Why should we support Hope For The Warriors?

For the project, each group had to choose a charity they believe in, research the charity and deliver a persuasive speech convincing the class to donate. Each student was asked to bring in $3 to $5, and the class voted for the most persuasive group send their collective donation. 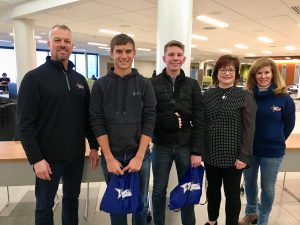 Hope For The Warriors President and CEO Robin Kelleher and Senior Director of Strategic Partnerships John Langford had the opportunity to meet and thank Daniel and Carson during a trip to the Midwest.

WHY IT WAS PERSONAL

For Daniel, answering this question was than some of the other WHYs in his life. Sharing HOPE with his classmates was grounded by his own experience of his father, Chief Warrant Officer-04 with the Iowa National Guard, deployed twice to the Middle East. Discovering programs that his father, his family and many other families like his, could benefit from during the transition from war to home allowed him to passionately answer, Why Hope For The Warriors?

After reflecting on their work and achievement, Daniel Kellen shared the strategy behind their presentation in an interview with HOPE staff.

How did you learn about Hope For The Warriors?

When we were assigned the project, we just searched the internet for different military and veteran nonprofits, which is where we first discovered Hope For The Warriors. Ironically, a few weeks before, my brother, who works for Casey’s General store, gave us the suggestion, and I know [HOPE is] partnered very closely with Casey’s.

Why did you choose Hope For The Warriors?

We picked Hope For The Warriors because we wanted to focus on the military. We both have a history of military service in our families, and we feel veterans are overlooked when it comes to the support they get in society.

My great grandfather served in World War II as a military policeman and was discharged after the war in 1946. My dad joined the Army and then transferred to the National Guard after 20 years of service. He is a Chief Warrant Officer-4 with the 34th Infantry Brigade and he’s been deployed to Iraq and Kuwait. Now, he is in his 34th year of service to our nation with the Iowa National Guard.

For me, it’s the fact that Hope For The Warriors focused on the transition back to civilian life. When I talked to my dad about this project and asked him about the hardest thing about transitioning back to regular life after he deployed, he said there wasn’t enough of an understanding or enough support to help him transition from deployment life in Iraq and Kuwait to “normal” life, as he put it. He shared, “enough people didn’t realize it was hard to move from day-to-day tasks in a normal way.” I like how HOPE helps veterans try to return back to their normal life when they return home from deployment.

What were your main points as to why someone should support Hope For The Warriors?

We wanted to bring awareness that these men and women gave us their all while serving and have sacrificed so much, and that when they come home, they are not always getting the help they deserve, in my opinion anyways.

A few of the facts we shared during the presentation:

We feel Hope For The Warriors provides solutions to these problems by providing services that help those coming home from war and their families, especially transition services.

What feedback did you get from your peers?

We shared a lot of statistics, and one that really stood out to the class was the veteran suicide rate. A lot of the students commented that they didn’t realize how many veterans were dying by suicide every day. The second point they brought up was the broad range of problems that veterans face beyond PTSD and wounds from war, but problems with their families and finding jobs.

Thank you, Daniel and Carson, for being a voice of HOPE in your community and for bringing awareness to the programs Hope For The Warriors provides.