In 2017, we had the pleasure of granting A Warrior’s Wish dream wedding to Marine Corps Gunnery Sergeant Mark Daniels and his wife, Jesca. Their story is a true example of the strength of love and resilience and can be read in the blog, “A Warrior’s Wish Wedding.”

On K9 Veteran’s Day, we would like to highlight a very special member of the Daniels’ wedding party and family, Daniels’ best friend, his working dog, Aura. 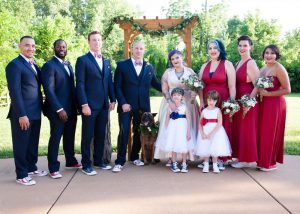 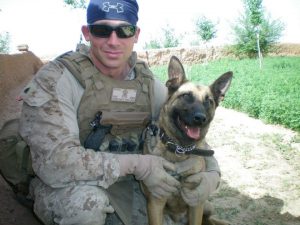 Introduced in 2010, GySgt Daniels and Aura were working together for over three years when Daniels’ was given his orders for a third deployment, his first to Afghanistan. On June 8, 2013, while on the way back to base from being on patrol, the pair were injured when their vehicle hit a 200lbs improvised explosive device (IED) blowing the engine and the front tires off. In a 2014 story with WITN, Daniels recalled the moments around the explosion and shared, “I remember waking up and it was myself and the radio operator and Aura. Aura was the first thing I saw when I came to, and Aura was just wagging her tail like, ‘It was fun I guess.'”

Thankfully everyone in the vehicle survived the explosion. However, Daniels sustained a TBI with bleeding and bruising on his brain along with neck and back injuries. Aura had suffered a collapsed lung and a heart arrhythmia. Unfortunately, due to Daniels’ condition, he was transferred from Afghanistan to Germany and then back to the US to continue his recovery, and Aura had to stay in Afghanistan. While she was being treated, staff reported she was anxious and refused to sleep. Before Daniels’ departed, they took Aura to see him and she climbed in bed cuddled up and finally fell asleep knowing her human was “okay.”

Daniels and Aura spent nearly five months apart before they were finally reunited at Camp Lejeune. Before the homecoming, Daniels was so nervous Aura wouldn’t remember him, but as you can see below this certainly was not the case.

Shortly after being reunited, on November 6, 2013, Aura stood by Daniels as he received his Purple Heart. 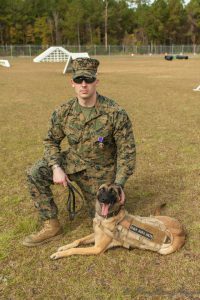 After Aura returned home, she underwent two surgeries, recovered and returned to full duty with Daniels by her side. Aura continued to serve as a working dog in the United States Marine Corps until May 23, 2015. 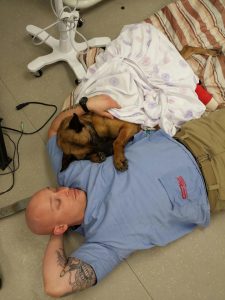 Today, Aura is enjoying her retirement with the GySgt Daniels, who is still serving in the Marine Corps in the working dog community, his wife Jesca, and their beautiful daughters. 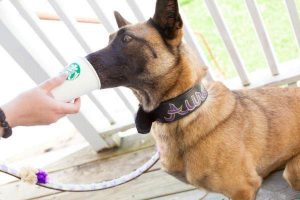 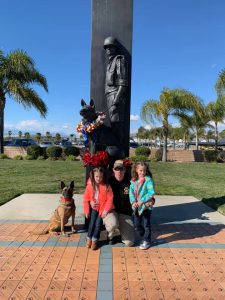