“The hunter that travels out into the woods is lost to the world, yet finds himself.” – Unkown

Georgia Army National Guard veteran Corey Speck received a hunter’s dream opportunity through Hope For The Warriors Outdoor Adventures program. He experienced the serenity and beauty of the Canadian wilderness during an elk hunt in Saskatchewan.

With the help of guide, Ryan McLennon, of Backcountry Outfitters and fellow hunter, Jered Joplin, owner of American Precision Arms in Jefferson, Georgia, Speck was able to bag an elk weighing almost 1,200 pounds, scoring 412. Describing the trip as, “life-changing,” Speck shares that being able to have the beautiful and majestic elk as a trophy and a freezer full of meat to enjoy with friends and family was incredible but wasn’t the only highlight of the trip.

Speck goes on to share, “hunts like this give veterans a break from normal life.” A lot of veterans, who have their lives changed forever after serving in combat, have difficulty transitioning back into civilian life. They feel a lack of camaraderie, discipline, and structure. Engaging in hunts gives veterans the opportunity to enter a community of people whose friendship is built off the shared understanding of the responsibility of owning and operating a firearm and ethics of hunting that yield respect for nature and conservation.

For Speck, this experience made him experience indescribable feelings of pride, excitement, and accomplishment. He headed home to Georgia with new friends that felt like family and a new hobby. Fellow hunter, Joplin who got to experience a special moment on the hunt with Speck shared, “Seeing him get choked up when he walked up to the animal was great because I know it meant a lot to him.” 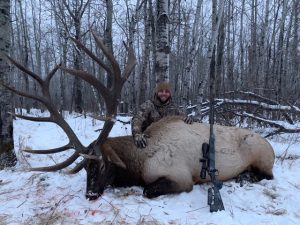 For nearly 10 years, Sergeant Corey Speck served in the Georgia Army National Guard, 48th, Infantry Brigade. In 2009, Speck went on his first deployment to Ghanzni Province Afghanistan, where he was selected to serve on a 14-man team who trained, mentored, and fought alongside the Afghan National Army. During this year-long deployment, he engaged in 250 firefights. He then deployed to Kabul, Afghanistan as a Personal Security Detachment for an Army Colonel and even though this deployment was much quieter, he was able to gain valuable insight of government of Afghanistan and the state of the country. Returning home at the end of 2012, Speck assimilated back into normal civilian life and finished his contract in 2015. When asked about his time in service, Speck shared, “I excelled as a soldier. I loved wearing the uniform and the discipline. I saw a lot, did a whole lot, and I lived through it all.”

Although he has been out of the military for three years, the valor he exhibited while wearing the uniform will be recognized during a nation and military award ceremony this March in Poland.

During his eventful 2009 deployment, Speck bravely and selflessly risked his life to save a Polish soldier and fellow team members lives during a firefight. He took out a Taliban leader and two of his bodyguards in the process. Upon his return home from Afghanistan he was recognized by the Army with many honors, two of which for exhibiting valor. In March of 2019, Speck will be honored by the Polish government for his heroic actions and meet the Polish soldier he saved. The story of this firefight and Speck’s actions were highlighted in a Polish made documentary that can be viewed here on youtube.