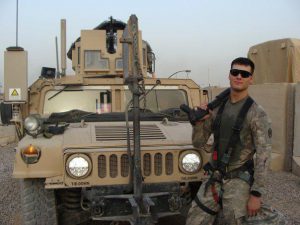 Green during his deployment in the Middle East.

Sergeant Mark Green served in the U.S. Army National Guard for 12 years. On his last deployment and upon his return home he was transitioned to the Army Warrior Transition Battalion where he underwent two surgeries and began his recovery.

Encouraged to get up and out of his room by his cadre, Green began going to adaptive sports activities and was introduced to not only adaptive cycling, but now, Run For The Warriors Race Director, Robyn Womac, who at the time was the adaptive sports coordinator for the Battalion.

Handcycling quickly became his outlet where he didn’t feel limited by his disability and gave him the opportunity to socialize. When he was faced with the news of having another surgery, Green was worried that he would have to give up his newfound passion. This was a fear Womac wouldn’t allow him to have.

Not even a month after surgery, Womac moved Green from a recumbent bike to a handcycle that allowed him to still remain active despite his cast.

Green shared, “I fell in love with the challenge of handcycling. Having something to look forward to
every morning knowing that I was able to get out of my room and be a part of a team again and be physically active with other wounded warriors. It allowed me to challenge myself and start losing the weight I was gaining post-surgery. I didn’t have a goal or purpose before that and now I had one. It was nice to have someone to compete with even if it was just myself.” 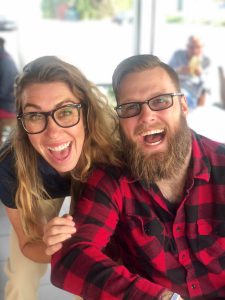 Womac and Green during 13th Annual Long Island Run For The Warriors festivities.

After separating from the Army, Green no longer had access to the adaptive sporting equipment and he felt as though he lost his purpose. This caused him to take a few steps back in his emotional and physical recovery.

“I was sitting at home backsliding into depression, I lost all my drive. Nothing was getting me up and out of bed in the morning” said Green. 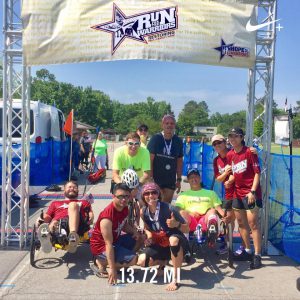 Soldiers from Warrior Transition Battalion at the 2017 Jacksonville Run For The Warriors race. Green on the recumbent bike (far left) and Robyn Womac (bottom center, right).

Although, he is using a loaner handcycle while his custom cycle is being built, Green shared how cycling has changed his life and how grateful he is to now have his own.

“Once I started riding again I felt a sense of purpose. I was able to purchase a new car, got into college, took better care of myself and found someone I want to spend the rest of my life with. Knowing that I now have my own handcycle I won’t ever have to worry about the possibility of regressing. I have had a complete change of quality of life since getting to be back on three wheels.  I am just so grateful for this opportunity that Hope For The Warriors and Crown Ford have granted me. I now have the ability to ride new roads and pursue new challenges this upcoming year, to build upon myself. This warrior’s road to recovery is always on going and thanks to your generosity I will be traveling on a much smoother road.”

Competing at the Long Island Run For The Warriors

The Long Island Run For The Warriors is truly a unique and spirited race in a community that takes immense pride in honoring service members, veterans and military families. Humbled by the welcome he received and the generosity of the community, Green shares how this experience left a lasting impact on his life. 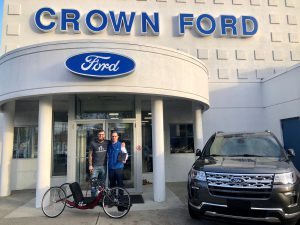 Green and Chris Anderson during the hand cycle presentation.

“All in all it was an eye opening and humbling experience. To see so many people putting their time and energy to supporting warriors, like me, whom they don’t even know. It is just incredible. I met a man who donated resources to a complete stranger to improve my quality of life. Then, he took the time out of his busy life to personally get to know me—who I am, what my goals and passions are. He saw me start the race and was there at the finish line to put my medal around my neck, all on his weekend off. There were so many HOPE staff members making sure I was taken care of, making sure I had a good experience and encouraging me through this ride. 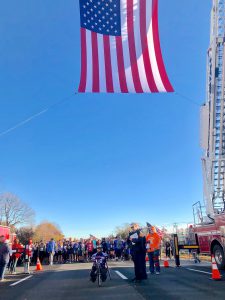 Green at the start of the 13th Annual Long Island Run For The Warriors.

Emotionally, this was the hardest ride I have ever done, especially after visiting Ground Zero just days before, it got me thinking about a lot. At the run there was a field of flags with labels listing
fallen warriors names, branch of service and date of death. I selected the flag that bore the name of fallen soldier SGT Hanson, it was a heavier weight to bear after visiting the site of so much heartache. I was able to do this ride due to the ultimate sacrifice made by SGT Hanson and so many others. I was honored to carry on their memories on Veterans Day weekend. It was a tremendous experience I will carry with me forever. Every time I get on this bike I will remember the Long Island run and what I took away.

Advice to his Fellow Wounded Warriors 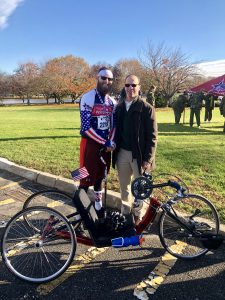 Now that Green has a handcycle of his own, he has set some really big goals for himself to accomplish in 2019! With a loaner hand cycle, Green has competed in at least a dozen races like Pedal For Pie 2017, Tour De Moore 2017, Little Pigs Triathlon 2017, Run For The Warriors Jacksonville 2017, Soldier Ride Miami 2018, Fayetteville Metric Century 2018 and Run For The Warriors Long Island 2018. Now with is own handcycle, his number one goal is to complete a full Century, a 100-mile cycling race.

Reflecting on his recovery, the race and what’s next for him, Green gave this great advice to his fellow veterans recovering from injuries and transitioning from military life, “Don’t backslide; remember that there are local group out there for veterans, like us, that specialize in our needs. Realize that it’s okay to ask for help, but don’t forget to love yourself. No one can help you if you don’t let them.” 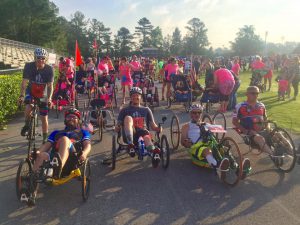 Mark Green (far left) with fellow adaptive cyclers at the start line of the 2017 Jacksonville Run For The Warriors race. 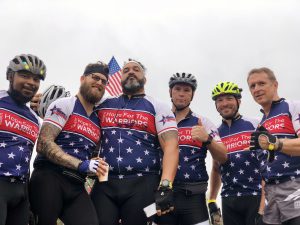 Green (second from the left) with Team Hope For The Warriors cycling group at Fort Bragg, NC. 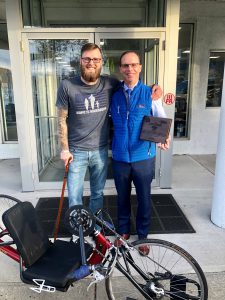 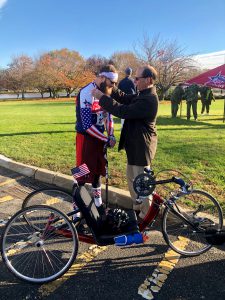 Chris Anderson of Crown Ford giving Green his medal after the 13th Annual Long Island Run For The Warriors race.

To learn more about Hope For The Warriors Sports & Recreation.