Team Hope For The Warriors | Lindsey and PJ Preddy

If there is one thing military family’s realize, it is the importance of spending quality time together. As West Virginia National Guard officer, Lindsey Preddy prepares for a year long deployment to Afghanistan, she and her husband of over three years, PJ, former US Army 101st Airborne infantry officer, now serving with the PA National Guard are preparing to run the a marathon together for the first time. Accomplishing marriage goal they had set for themselves. 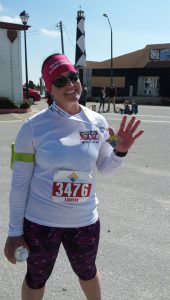 On November 4th, the Pittsburgh couple will be taking on the TCS New York City Marathon, scratching another marathon off Pj’s wish list and making Lindsey an official marathoner. Excited to run in a premier race, the couple shares that they are ultimately motivated by their commitment to each other and the opportunity to support their fellow veterans. Lindsey shares, “When the opportunity came to combine raising money for veterans and their families, and run in this historic race, then this became the race for us.   We’re very excited at the opportunity to do this as both a couple and as veterans, it’s important we support the veteran community and help in any way we can with the charities that support the people we’ve served with.” 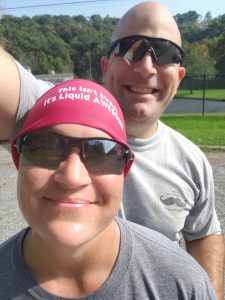 Beyond their own service to our nation, Lindsey and PJ are both military brats who learned about Hope For The Warriorsthrough a friend. From growing up in the military culture to serving themselves, Lindsey and Pj understand the need for support programs like medical care, professional counseling and education assistance, in addition to having a passion and sense of loyalty for support their fellow veterans and military families. To the couple, joining Team Hope For The Warriors was a “no brainer”.

As the days countdown until deployment, the couple finds joy in training together and being each other’s coaches and support system. Using the Hal Higdon’s Marathon guide, Lindsey and PJ have been using their training as an opportunity to find new running trails and seeing new parts of Pittsburgh. 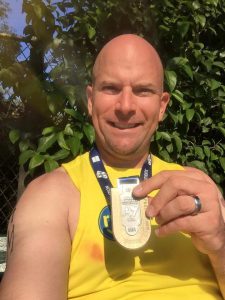 PJ with his finisher medal from the Athens, Greece Marathon.

In addition to this running guide, they have been thankful for the support Team Hope For The Warriors director, JD Baker, community and peer-to-peer manager Irina Watkins, and fellow team members have shown them. PJ shares, “ In past races, I’ve raised money for veteran charities, and no other charity has shown more care and support for us, as veterans and racers, then Hope For The Warriors. I am very impressed with how good their team is and how willing they’ve been to bend over backwards for us. It’s amazing to be on this team!”

Outside of training for this marathon, both Lindsey and Pj shared that after joining the Army, running has been their outlet to decompress. Although their military service puts pressure on them to stay fit within regulations, they both have learned to love running because it’s an easy activity. After a long, busy, and noisy day it is cathartic to just turn on some good music, strap on your shoes, and go enjoy the quiet and peacefulness of the outdoors.

Although after the TCS New York City Marathon, they will have to train a part from each other for the next year, both are committed to staying physically fit and have already made a list of marathon goals to accomplish after homecoming. The list includes running the Pittsburgh Marathon, a marathon in Europe, Rock N’ Roll races, and the Disney themed runs. Outside of running, they are also excited to continue going on their own adventures that include biking, kayaking, and anything that allows them to spend time together exploring the outdoors.

Join us in wishing this power couple GOOD LUCK at the TCS NYC Marathon and god speed during their deployment.