Anderson during the 2009 Run For The Warriors race in Jacksonville, NC.

After being told he would never walk again, United States Marine Ryan Anderson defeated all the odds as a member of Team Hope For The Warriors.

In 2006, Staff Sergeant Anderson was subjected to seven improvised explosive devices (IED) within a three-day span in Iraq. Eventually being diagnosed with PTSD and a mild Traumatic Brain Injury (TBI), the injuries affected his ability to speak and eventually left him nearly unable to walk.

“The thing that kept me motivated was knowing that I could get better,” Anderson said. “Plus, having my family as my cheering section behind me every time.”

After being stationed at the Wounded Warrior Battalion – East in Camp Lejeune, North Carolina, he was connected to Hope For The Warriors and reached out in hopes of finding a way to remain active. 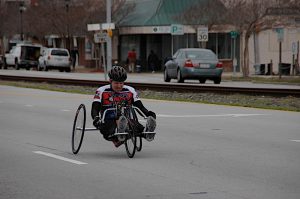 Handcycling at a race in Morehead City, NC.

“Hope For The Warriors donated a hand cycle to me, which helped me to regain my freedom back,” Anderson said.
Anderson began his rehabilitation by hand cycling in 2009 and worked to build up his strength and balance. He trained with Paul Kelly, a C-6 quadriplegic who suffered a spinal cord injury more than 30 years ago, who competes in marathons with a hand pedal bike. Their friendship and shared passion has played a key role in Anderson’s recovery and growth as an athlete.

In 2012, Anderson accomplished something he never thought he’d do again. He started running. In May of 2013, he ran the Jacksonville Run For The Warriors, his first half-marathon.

Now, he is training as a member of Team Hope For The Warriors for the Marine Corps Marathon in October and has a goal of running it in under four hours. Anderson trains around five to six days a week with an average of 18 to 20 miles, and is grateful that he’s found HOPE after his injury. 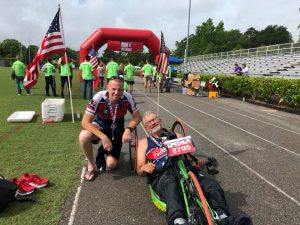 Anderson and Kelly at the Run For The Warriors race in Jacksonville, NC.

“It just means so much because they’ve given me so much after my injury,” Anderson said. “They’ve helped me get started from a hand cycle, all the way up to now I’m running marathons, and I just couldn’t do it without them.”

Since his injury in 2006, Anderson has continued serving in the Marine Corps and is working toward a dual master’s degree in business administration and of science and finance from Webster University. He currently resides in Havelock, North Carolina, with his wife and five children. This past spring, Anderson and Kelly compete in the Boston Marathon together. On Sunday, October 28th, Anderson will be running the Marine Corps Marathon for the first time.

“This organization has helped me to feel normal again, and I can thank them enough for everything that they do,” Anderson said. 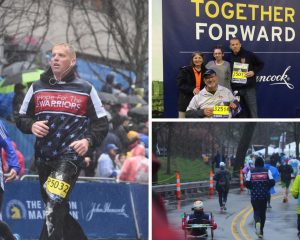 Anderson and Kelly during the 2018 Boston Marathon.