Veteran William Dyer entered the Army at 17 years old in March of 2005 in hopes of starting a new life and getting away from a toxic and impoverished community outside of Panama City, FL.

Originally enlisting as a cook, after basic training Dyer was sent to airborne school and upon graduation was sent to Fort Bragg, North Carolina, and finally received orders to Fort Hood, Texas for combat training. After the completion on combat training, Dyer was given orders to Cob Speicher, Iraq, Saddam’s hometown, and was shipped off to war at just 18 years old.

Once he arrived in Iraq he assumed the role of a kitchen supervisor, but after his friend Timothy Fulkerson was killed in action, Dyer was chosen to take his role at the 50 cal gunner on patrols. In Dyer’s words, “he was honored to fill the seat of a hero.”

Dyer and the Patrol QRF Scorpion team experienced extremely dangerous and heavy combat patrols. During one of the patrols, an Arctic White Owl began following and landed on him. One of the nationals explained that in their country the bird is a blessing from God and a guardian angel. Days later, it was announced their deployment was extended. Dyer went on to complete many more missions as a gunner facing near death experiences. At 20 years old, newly pinned Specialist Dyer left Iraq without a scratch or physical wound.

A homecoming and Two PCSes later, Dyer found himself back in combat in Bagram, Afghanistan as a Foreign National Escort and had the honor of being selected as one of President Obama’s escorts during a visit to the airfield.

After this deployment, he was welcomed home with bad news on the home front and decided to leave the Army and enter the civilian world. Due to circumstances, he described his transition as, “hell.”

Newly divorced, Dyer returned to Panama City and found himself homeless and jobless. After searching high and low for a job, he finally landed one as a purchasing manager for a local restaurant, which allowed him to use the degree he earned in Hotel Management and Hospitality while in the Army. Just as things were looking up with a new job, roof over his head, and rescuing a dog, Dyer’s invisible wounds from war began to surface. Realizing he needed help, he enrolled in treatment in the Biloxi VA PTSD treatment program.

Failing the treatment program, Dyer returned home to find his job had been filled and was back on the streets. Extremely depressed and hopeless, he found himself in and out of jail battling a drug addiction. While in jail, he discovered his passion for writing and wrote for other inmates who couldn’t read or write in exchange for snacks.

Realizing he needed to get his life together, he turned to God and continued to use writing as a therapy. In November of 2016, he left jail for the last time and returned to Biloxi for PTSD treatment.

Still struggling with the highs and lows of rebuilding his life from the ground up, Dyer reached out to Hope For The Warriors and was supported with rental assistance through its Transition program but was given so much more.

While supporting Dyer with rental assistance, he landed a new job at a New Orleans VA center, except he needed 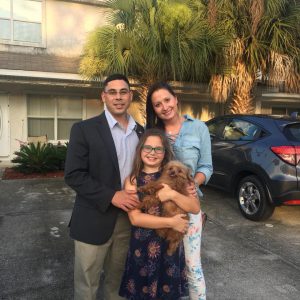 additional support for transportation and lodging for the welcome aboard brief. Excited for him and proud of his dedication to his recovery, our Transition program was able to assist to ensure he was able to complete the job training and complete the process of reinstating his license to compute to and from work. Now, Dyer can focus on his new career and begin building a new life with his fiancé.

Brian Papakie, USMC (ret), Career Transition Program Manager, shares, “When I began working with Mr. Dyer there was some anxiety surrounding his situation, but as we talked and worked together, he quickly realized that support was on the way.  Mr. Dyer was dedicated to getting his life moving in the direction that he wanted it to go; with him behind the “steering wheel”.  Just like the service that he provided to our nation, Mr. Dyer remained dedicated to his mission and we are honored to provide aid to someone who has sacrificed so much.

Continuing his path of healing, Dyer continues to write everyday. As a “thank you” for the HOPE he received, he wrote a poem about his experience with Hope For The Warriors.

Hope for the Warriors

Forgotten. Once cheered and praised for heroism. Brave, selfless soldiers of all races and walks of life uniting for a cause greater than the average local news. A jack of all trades, trained in combat and a career that keeps the military in a world of its own. Committing to a sacrifice that doesn’t promise coming home to your family in time for dinner or coming home at all with intensions of honoring our President’s goal for the safety and freedom of America. To take on the duty as a husband, a wife, a father, or mother full time on top of their daily tasks as a soldier. Now a Veteran, forgotten and denied fair treatment. Disabled from protecting this great country of ours. Establishing the rights of freedom with their own bare hands as the backbone of the military. Homeless and confused, bound to a bottle of poison in an attempt to wash away the pain, but PTSD is haunting the unwanted, unneeded mind of the one that once kept us safe. A veteran whom once cared for their loved ones, now pushing them away with every word and aggressive notion. A misunderstood warrior that was made this way by the confused patriot that claims to be a supporter of troops and veterans, committed to a rehab or incarceration for aggressive and unruly behavior. Who will lend a hand to these heroes that now have a financial and social struggle? Who will be an advocate to the disabled veteran who now knows nothing of his or her life other than the tragic mishaps that led to their current life situation? Somewhere out there is a caring proactive supporter in the demand for benefits of veterans without the outlandish questions and a circle of exams that leads to further self-destruction. Somewhere out there is a nonprofit organization whose only goal is in the salvation of a once known hero whom now is at the end of their ropes with faith in the redemption of life. Somewhere out there is hope for warriors.

As we support our veterans and military families, our ultimate hope is that they give the HOPE they have received to others. 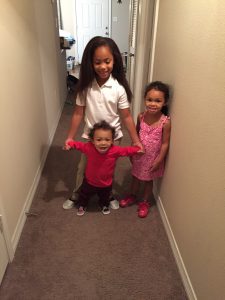 Since coming to Hope For The Warriors for support in July of 2018, Dyer has been committed to building a stable life for his family. Currently, he works at a VA center in New Orleans and can support his fellow veterans and military families while providing for his own family. When Hurricane Michael devastated Florida, Dyer was able to provide a home for his two nieces and nephew who lost their Panama City home and all their possessions. Since taking in his extended family, Dyer has been the family’s sole financial provider, enrolled the kids in daycare and school and has given them HOPE as they start their new life living with him in New Orleans.
This is one example of why Hope For The Warriors is essential. We support veterans like Dyer with a full-cycle of care programs encompassing the mind, body and spirit of the entire family unit.
Facebook0Tweet0LinkedIn0Print0Email0