On the anniversary of 9/11, we join the community in remembrance of the lives lost on that tragic day. We also pray for and honor those who went into the rubble risking their own lives to save the lives of others. Amongst these heroes is one of our HOPE staff members, Gus Cabarcas, Community Development Manager, who bravely shares his story from that day.

An ordinary person facing extraordinary circumstances and acting with courage, honor, and self-sacrifice.

“Like every other day, Monday, September 10th, I went to work the midnight tour in the Bed-Stuy/Bushwick section of 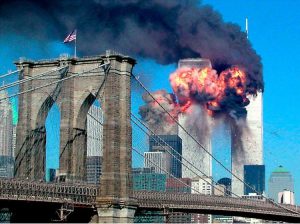 Brooklyn. During this time I was a patrol Sergeant assigned to the NYPD/Housing Public Service Area #3. After my shif

was over, it was now the 11th, I was driving home to Long Island when my wife called to tell me a plane struck one of the towers. I immediately called my command and reported back to work. I was instructed to gear up. Myself and 8 other police officers were headed to Lower Manhattan, not really knowing what to expect 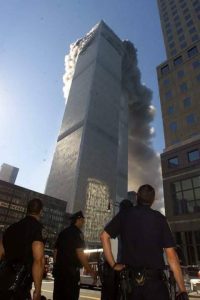 We arrived after the second tower collapsed. We just went in and did our best to try and evacuate people and get them to safety. On the ground there was just mass confusion, people running everywhere, unsure where o go, it was pitch black with debris and dust all around us. All communication was essentially cut off- cell phones, radios- there was no outside communication.

At the time, we had no idea what was going on. We were just responding. There were rumors that more planes were going to attack, you could hear F-16’s and other military planes flying over, which caused even more panic on the ground. People just ran to where they thought was safe.

Around 4:30 in the afternoon, Seven World Trade Center, came down. I got knocked down by a pile of debris and was pushed under a vehicle and was covered from head to toe in dust and couldn’t breathe. When I finally came to, I found my fellow officers and we went into the nearest building, which happened to be a deli and took water bottles to clean ourselves off the best we could. We regrouped and that night we teamed up with other officers and went to different spots to dig for survivors in the rubble- we didn’t find any.

The one thing I will always remember about that day, how quiet and peaceful it was that night at ground zero. The debris that coated everything around us was so thick, in some places it was knee deep, and it muffled the sound. All you heard were some F-16s flying and patrolling the air above Ground Zero and the beeping from the oxygen tanks of the firefighters who were buried under the rubble. 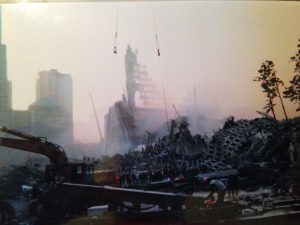 The days, weeks, and months to follow were just a constant rotation of supporting recovery efforts at Ground Zero, sorting debris when it was taken to the landfill on Staten Island, or attending the funerals of your fallen NYPD/FDNY colleagues.

During the 6 months that followed 9/11, I spent over 400 hours both at Ground Zero/Staten Island Landfill. Living through this has made me realize that life is short. Even though I try to forget about it, lately I’m reminded about it every month or so, when I hear of a colleague either being diagnosed or died from cancer due to the toxin exposed us to in the debris. Although I’m healthy, I can’t help but think in the back of my mind that one day I will be next.” 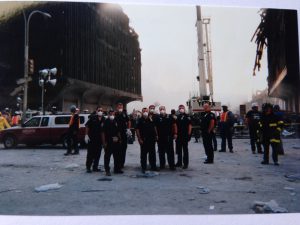 If you have had the opportunity to meet Gus, you would quickly realize that he has a heart of gold and his mission and purpose is to serve his community. The US Army combat medic veteran and 21-year retired NYPD Sergeant, turned to volunteering to find healing after the trauma he experienced during 9/11, which is where he found HOPE. 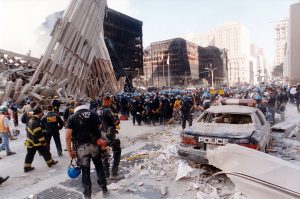 After the war started, Gus and his fellow NYPD police officers would make trips to Walter Reed Army Medical Center and
Bethesda Naval Hospital to visit wounded services members and their families. He shares, “It was therapy to visit them, and personally thank them. Being at Ground Zero on 9/11, I never felt so helpless in my life. My job was to protect the community, we got attacked and we couldn’t do anything about it. I couldn’t protect them. Knowing that they had our backs and they went and fought for us made me want to show them my gratitude for their sacrifices, it helped me heal.”

Gus continues, “During a visit to Walter Reed Army Medical Center in 2006, I met former HOPE staff member, Tina Atherall, and I learned about the organization and we began getting them more involved with the NYPD and inviting
wounded service members to the different events in New York City. We would always start the visits at Ground Zero where it all began for me and the reason many of the wounded service members joined the military.” Following his retirement from the NYPD in 2012 Gus relocated to the Dallas-Fort Worth, Texas area, and he officially joined the HOPE staff in February of 2013, where he continues to support and serve veterans and his community. 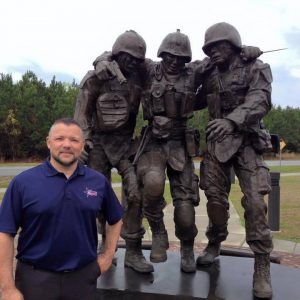 Thank you, Gus for your life long and selfless service to the community and to our nation. The impact you’ve made on the lives of others is immeasurable. We are honored and blessed to have you apart of our HOPE family.

The Impact of 9/11 on First Responders and Survivors

9/11 Advocate and President and Founder of the Feal Good Foundation, John Feal, estimates that someone dies from a 9/11-related illness every 2.7 days.

As of June 2018, 88,484 first responders and survivors have been enrolled in the federal World Trade Center Health Program with a 9/11-related illness.

Estimated number of New Yorkers suffering from post-traumatic-stress disorder as a result of 9/11: 422,000