“Wilderness is not a luxury but necessity of the human spirit.”–Edward Abbey 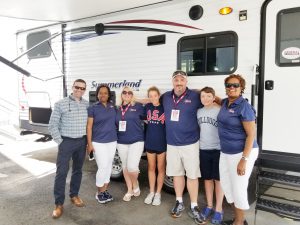 In 2004, while on a mission to gather information from locals in Tall A’far, Iraq, Sergeant Costanzo was injured when his vehicle hit an improvised explosive device (IED). His injuries were treated in Kuwait and he returned to Iraq to complete the rest of the deployment. However, upon his return home, he realized his injuries were more severe and he sought treatment at Walter Reed Medical Center. It was then that he underwent multiple back surgeries and mental health treatment.

Costanzo’s road to recovery was rather bumpy, he returned back to full duty as a recruiter, which many service members will agree is a stressful and demanding billet. During this time, Costanzo developed substance dependency and resorted to alcohol to cope with his PTSD symptoms.

Recognizing his dependency, he had the courage to seek help and completed the Army’s substance abuse program. Upon completion, he decided it was time to start a new life outside of the military.

Eager to continue to serve his fellow veterans and using the skills he obtained while completing two recruiting tours, Constanzo worked in the non-profit and commercial sector, helping transitioning veterans like him, gain meaningful employment.

Committed to bettering himself physically and mentally, Constanzo realized that quality time in the outdoors was a necessity in his recovery. Finding true happiness and HOPE while planning camping adventures for his family, Constanzo wished for a camper of his own. On July 12, 2018, A Warrior’s Wish made his wish came true and he is now living out his favorite childhood pastime with his wife and children comfortably in their very own camper.

A special thank you American Truck and Trailer in Manassas for honoring a hometown hero and gifting Costanzo a hitch and calibration allowing him to transport the travel trailer with his current truck.

Learn More About A Warrior’s Wish