After two tours overseas, PTSD and TBI diagnoses and receiving a Purple Heart, Sergeant William “Bill” Morris wants to experience the world with his family.

In 2004, Morris enlisted in the United States Marine Corps and a few years later, deployed to Iraq. He spent one year in Iraq in 2007, serving as a camp guard. In 2011, he deployed for seven months to Afghanistan, serving as a squad leader carrying out dismount patrols.

During his tour in Afghanistan, Morris sustained second-degree blast injuries after his combat engineer stepped on an improvised explosive device (IED). After returning home, he was diagnosed with a TBI and PTSD. Morris was awarded a Purple Heart for the wounds he received.

A few months after his return, Morris received orders to participate in a TBI research study at Naval Air Station Pensacola and was involved in a major car accident. The vehicle hydroplaned and collided head-on with another car. The accident resulted in Morris breaking his back, having severe abdominal issues and a large abdominal hernia.

In 2014, Morris was medially discharged from the Marine Corps. He still battles his injuries every day and is learning to adjust to the civilian lifestyle. 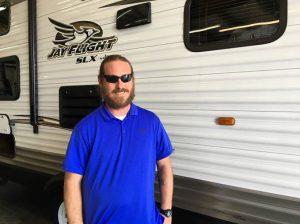 Marine Sergeant Bill Morris with his new travel trailer courtesy of Hope For The Warriors and it’s a Warrior’s Wish program.
For video and more photos, visit: https://bit.ly/2sVrVXe.

During his transition, Morris found serenity in spending time with his family in the outdoors, but due to the nature of his injures; he was unable to truly enjoy traditional camping. As he focuses on his recovery and establishes new post-injury family traditions, Morris wished for a pull behind camper. A Warrior’s Wish made his wish come true and he can now unwind and spend quality time with his family in a camper that has the necessary amenities to accommodate his injuries.