Get the Latest Updates
Facebook0Tweet0LinkedIn0Print0Email0
Grass cutting is a mundane chore to some and a hobby to many, but it’s a chore that yields pride upon completion and gives a sense of contribution to your household. In February of 2016, newly medically retired United States Army veteran Vaitogi Taetuli’s love of his hobby, yard work and the outdoors, were hindered by the injuries he sustained in battle.
In 2004, Sergeant First Class Taetuli was deployed to Camp Taji, Iraq. During the Battle of Najaf, he fought in a hand-to-hand combat, causing the insurgent to drop his armed hand grenade, resulting in a blast that severely wounded Taetuli. He was flown to and treated in the Navy medical tent in Babylon, Baghdad, and then to the Baghdad Combat Support Hospital for wounds to his left eye, right-side of his face, left forearm, right leg and foot. Later, Taetuli was medically evacuated to Landstuhl Regional Medical Center in Germany, and then to Wilford Regional Medical Center at Lackland Air Force Base to undergo surgery on his left eye.
His warrior spirit kept him motivated during his recovery, and in 2005, he returned to his unit at Fort Hood and trained to carry out missions in Jalalabad, Afghanistan. After 16 years of service, the father of three decided to medically retire in January 2016.
While navigating his transition from active duty, Taetuli longed to once again find joy, a sense of purpose at home and in the community, so he made a wish and Hope For The Warriors answered. In April 2018, Taetuliwas granted his wish of a new Poulan Pro 42” 19HP riding lawnmower. This helped restore his sense of self by being reunited with his passion of the outdoors, ; his sense of family by being able to contribute to the upkeep of home and serve church and neighbors, ; and HOPE for the future. He continues to stay focused on his physical and mental recovery and establish his new civilian life in Killeen, Texas. 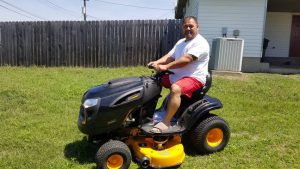 Army Sergeant First Class Vaitogi Taetuli aboard his new riding lawnmower courtesy of Hope For The Warriors and its A Warrior’s Wish program.
For more photos please visit: https://bit.ly/2vq3aWO