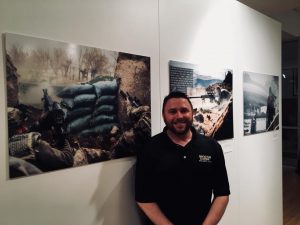 After over 20 of service to our nation, fulfilling missions on 3 combat tours to Iraq and Afghanistan and over 19 non-combatant tours, Air Force Veteran Kevin Wallace’s military career was dedicated to shots…not just from behind a rifle, but behind a camera as a combat photojournalist. His career path lead him to train and deploy with some of our most elite warfighters, Marine Corps MARSOC, Army Rangers and Green Berets, are amongst the few to capture and tell their stories in battle. Each mission he fulfilled, Wallace witnessed and captured death, destruction, survival and the lives of innocent people living in kinetic war zones. It was then that photography began to take on a whole new meaning.

Wallace who was awarded a Purple Heart and Bronze Star with Valor for his heroic action during an enemy ambush in 2011, retired in October of 2017, shares 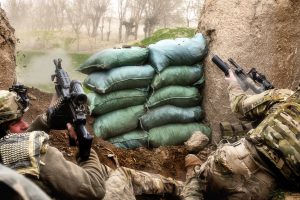 “The real irony is that while I truly believe in Afghanistan we were ridding the world of monsters, some of us were slowly becoming monsters ourselves; and while most of us voluntarily went to some of the most kinetic valleys on the planet to ensure our children wouldn’t be faced with the same nefarious enemies, we ourselves sometimes unwillingly and unknowingly brought monsters back to our own living rooms. This was the case for me. I wanted to ensure my wife, daughters and son were safe from the evil that lurks abroad, but ultimately I betrayed them by returning this final time with such a warped and blackened soul that I was incapable of being a husband or father, of being a man, for too long. I finally saw the true extent of my PTSD through the verbal and emotional abuse I was inflicting at home. I’ve tried many methods of therapy, but the only thing I have found that truly works for me is in creating art and writing poetry.”

To support Wallace in his post-traumatic growth and his mission of capturing and telling the story of his fellow veterans who share like experiences in combat and life after, his wish for a camera and underwater camera equipment was granted!

Wallace will be using his camera equipment when he visits one of his favorite scuba spots and duty stations, Okinawa, Japan! He also will be furthering his education and skills as a photographer at George Mason University’s Master’s in Fine Arts Photography program. In his spare time, he shares his passion for photography and talents by mentoring undergraduate photography students.

Purchase his book, “Don’t Look, Can’t Look” a collection of his photography and poems. 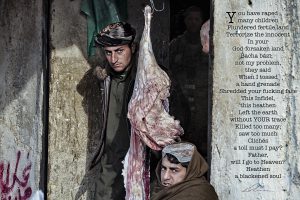