The exhibit will feature art by Hope For The Warriors and Frontline Paper-assisted veterans in different formats – painting, photography, sculpture and Frontline Paper which transforms uniforms into handmade paper used to create storytelling pieces by veterans. 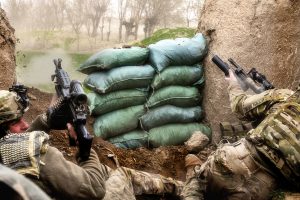 Wallace is a Purple Heart and Bronze Star with Valor recipient and is just a month into his retirement after over 20 years of service in the United States Air Force. During his years in service, Wallace was a combat photojournalist who deployed three times, twice to Afghanistan and once to Iraq with traditional Army or Special Forces teams of all branches.  He also completed over 19 non-combatant deployments in the Asian Pacific, Europe, Middle East and other various regions of the world.

His love for photography started as a teen when he captured images of a surf competition and it continued to grow over the years. He was accepted into the combat photojournalist MOS when he re-enlisted after 9/11.  After capturing death, destruction, survival and the lives of innocent people living in these kinetic war zones, photography began to take on a whole new meaning for Wallace.

During Wallace’s combat deployments, he took on many assignments accompanying Marine Corps MARSOC, Army Rangers and Green Berets, and many other Special Forces teams on their missions. In over 72 occasions, his role of capturing images and collecting video and audio footage of the mission turned into him participating in the mission of returning enemy fire, known as troops-in-contact situations. During a mission on April 4, 2011 in the Baghis Province in Afghanistan, Wallace was award a Purple Heart and Bronze Star with Valor for his heroic action during an enemy ambush.

Wallace shares, “In combat sometimes we are faced with killing vile people and I’m ok with that; but sadly sometimes we also find ourselves morally jeopardized by the innocent and by accidents. I believe in Afghanistan we were freeing innocent villagers from an oppressive and horrific Taliban regime — one that preyed on the weak and terrorized women and young girls.  The real irony is that while I truly believe in Afghanistan we were ridding the world of monsters, some of us were slowly becoming monsters ourselves; and while most of us voluntarily went to some of the most kinetic valleys on the planet to ensure our children wouldn’t be faced with the same nefarious enemies, we ourselves sometimes unwillingly and unknowingly brought monsters back to our own living rooms. This was the case for me. I wanted to ensure my wife, daughters and son were safe from the evil that lurks abroad, but ultimately I betrayed them by returning this final time with such a warped and blackened soul that I was incapable of being a husband or father, of being a man, for too long. I finally saw the true extent of my PTSD through the verbal and emotional abuse I was inflicting at home. I’ve tried many methods of therapy, but the only thing I have found that truly works for me is in creating art and writing poetry, which I sometimes call “writing raps”. 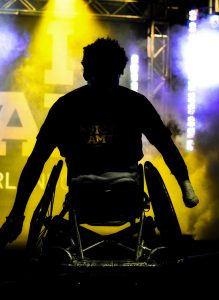 My work is mainly inspired by a darkness that lives inside me. I’m also always looking for a deeper understanding of the world around me, so I am very interested in the changing faces in European cities, the destruction of nature and generally showing humanity through action, not inanimate.”

What Wallace hopes visitors see and feel when they view his work at the Warrior Art Exhibit is this:

“I hope this show touches someone and that the right person or people gain exposure to our art. I have committed the last decade of my life to spotlighting human experience and the wide array of circumstances in which humanity overcomes or succumbs to the climate it faces.

Through combat camera and in my own art, I have committed myself to showcasing the voiceless Lance Corporals or Specialists whom put their lives on the line in rugged combat outposts at the farthest stretches of civilization, and do so without 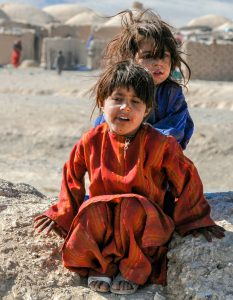 the need of recognition or appreciation, but for the love of their brothers and sisters. I’ve been very fortunate to get to showcase motherhood, politics, poverty, wildlife, wild rides, celebrations, sadness, solitude, perseverance, death, survival, promises both kept and broken, presidents, princes and kings, and very unique inside looks into kinetic war zones. I have committed myself to showing the world what it is to love, hate, laugh and be afraid – to showcase the world both as it is, and reveal how life could be.

I believe art inspires society and helps highlight the human condition and global state of events in a manner that can inspire change or improvements. This art is important.”

Wallace’s art can be viewed on his website, Global Clicks Photography or you can purchase his book, “Don’t Look – Can’t Look” a collection of his war photographs from the villages of Afghanistan and lyrical expressions of war in Afghanistan and on the Home-front.

To learn more about other participating artists, join us during the opening night on February 28, 2018 from 6-9 PM at El Barrio or watch the panel discussion LIVE on the Hope For The Warriors Facebook Page!

If you are unable to attend but would like to support Hope For The Warriors, so that we can continue to offer opportunities like the Warriors Art Exhibit for veterans, please donate today.