The 2017 Got Heart Give Hope® “Faces of Hope” themed gala represented the lives of the veterans, service members, military families, families of the Fallen, and caregivers that Hope For The Warriors programs impact daily. The evening’s festivities were emceed by NBC sportscaster and lead race announcer for the NASCAR on NBC team, Rick Allen.  Addressing the room full of retired military, wounded heroes and their families, sponsors, and fellow military non-profit leaders, keynote speaker General Robert B. “Abe” Abrams, United States Army Commanding General, reminded us of the daily sacrifices made by our service men and women still serving as well as our military families

“We are fighting the longest war in our nation’s history and we are doing it with an all volunteer force. It is the best fighting force our country has ever produced. That is special.” ~ General Abrams

Keynote speaker General Abrams, reminded us of the daily sacrifices made by our service men and women as well as our military families. Noting how the support of our warriors is embedded in our nation’s history, he states “it’s a unique mark in the American spirit” and defines our nation’s character.  Highlighting stories that have impacted his life, General Abrams mentioned Hope For The Warriors staff member Patti Katter for her devotion to her fellow caregivers and veterans like her husband, in addition to being an inspiration to many. 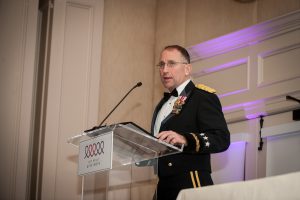 “Why do they do it? What makes these men and women place the good of the nation over themselves. Why do they willingly place themselves in harms way? I can tell you in a few words, duty, resilience, and hope.” – General Abrams

Since 2010, we have been honoring service members and military family members with remarkable stories of recovery and achievement with the Vigiano Family Hope and Courage Award. The award is named after Captain John Vigiano, Sr. retired FDNY, and his wife Jan, gave both of their sons on 9/11-one who served as a fire fighter and the other as a police officer in New York City. The tragedy and heartbreak of 9/11, only strengthened their desire to serve the community and expand their outreach by visiting troops in Iraq to personally thank them for their courage and sat at their bedside in medical centers to encourage their recovery. John joined Hope For The Warriors as an Honorary Board Member in 2006 and Jan continues to shine with strength and wisdom for her family. 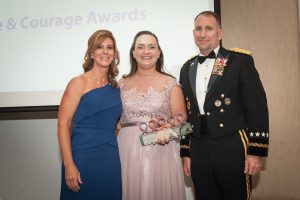 Dana served in the Marine Corps from April 2003 to April of 2007. She joined after graduating high school, through the encouragement of her brother who was a Marine. Dana graduated in the top 10% of her platoon and graduated second in her class in Military Occupational Specialty (MOS) school. Dana then chose to be stationed at Marine Corps Base, Camp Pendleton, Calif., and worked at the Consolidated Personnel Administrative Center (CPAC). With one year left of service, Dana was selected to work for the Commanding General of Marine Corps Installations West in the Staff Secretary Office.

Shortly after getting out of the Marine Corps, Dana moved to Camp Lejeune and married Adel, another Marine. In 2013, Dana received a Bachelors of Arts in Elementary Education from UNCW with a 4.0 GPA.

In August of 2013, after twelve and a half years of honorable service and five combat deployments, Adel’s multiple injuries finally caught up to him, forcing him to retire. This changed the entire family’s plans, and Dana became a full-time caregiver.

In addition to her role of caregiver, wife, and mom of two young boys, Adel (9) and Amir (4), Dana uses her gifts by volunteering with Hope For The Warriors and at her church, where she runs many ministries.

Dana lives by the following Bible verses:  Trust in the Lord with all your heart and lean not on your own understandings. (Proverbs 3:5) and I can do all things through Christ who gives me strength. (Philippians 4:13) 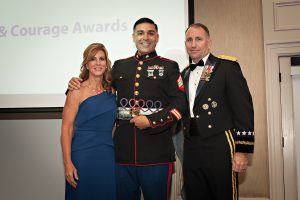 Mario enlisted in the United States Marine Corps in January of 2004. Before entering the military, he played football at Southern Oregon University. Unfortunately, in his junior year, Mario tore his Achilles tendon which ended his playing career and left him feeling purposeless. Mario knew he needed a change and that is when he found a recruiter’s office and joined the Marine Corps. When he arrived at Camp Pendleton, he deployed within two weeks to Fallujah, Iraq, in March of 2005.

Shortly after returning from Iraq, Mario met his wife, Elizabeth, and they now have two sons, Quentin (9) and Koa (5). Mario also earned his Bachelor’s and Master’s degrees.

Currently, Mario volunteers with Hope For The Warriors in Texas. His inspiration and strength come from his faith and trust in God.

Mario lives by the following Bible verse: “For I know the plans I have for you,” declares the LORD, “plans to prosper you and not to harm you, plans to give you hope and a future.” (Jeremiah 29:11) 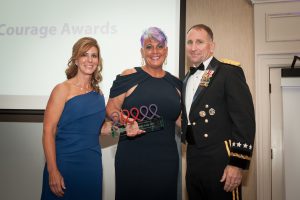 Hope enlisted in the Army on August 3, 1983. She was raised in a very strict home and tired of rules, so she walked away from a full ride scholarship to Penn State and joined the Army. Little did Hope know, the Army had even more rules and structure than her home. She went to Fort Dix, N.J., for boot camp and Fort Lee, Va., for her Advanced Individual Training (AIT) quartermaster school.

Hope’s first duty station was Mannheim, Germany, where she earned many awards in the American/German Gun Club. After her time PCSing from Germany, Hope headed to Yuma Proving Grounds, Ariz., and made Specialist-E4 after only being in for two years. Some of her other duty tours included Fort Hood, Texas, as well as Hawaii and Iraq.

My life has been very eventful, and all the choices I have made have molded me into the strong woman I am today. I am blessed to have a strong network of people in my life. My immediate and extended family is so important to me. I must express my gratitude and love to the Wrights, Harpers, Sants, Catletts, Mccains, Bequetts, Mayes, Longs, and Yocums. The support and love I received from all of you is amazing. 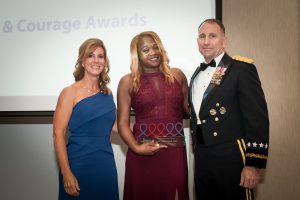 Gabby joined the military in May of 2000 while she was still in high school to broaden her horizons and create new life experiences. She served with the 1206th Quartermaster out of Wetumpka, Ala., which deployed to Balad, Iraq, in 2003. Unfortunately, Gabby sustained a knee injury two weeks before her unit deployed which led to her eventual medical discharge in March 2005.

Gabby has overcome many obstacles in her life, and she continues to have a positive attitude through any negative situation she faces. Gabby met Hope For The Warriors while recovering from a couple of surgeries. Hope For The Warriors was able to provide Gabby with financial assistance to cover her living expenses while she received treatment miles away from her home. Currently, Gabby volunteers with a nonprofit agency that supports those struggling with homelessness. 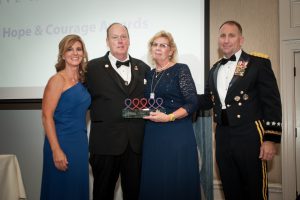 On August 21, 2012, Bob and Cindy became Gold Star Parents. Kristie was one of the 22-A-Day who died by suicide. The Roberts asked themselves, “What do we do now?” On their journey after Kristie’s death, the family has been embraced by many but significantly inspired by two individuals. SFC Arthur Coon, Kristie’s recruiter, who was the first person to give Bob and Cindy strength, compassion, and support daily. Carrie Farley, an American Gold Star Mom, provided friendship and a support system that only those who have lost a child can offer. Cindy and Bob have been given the strength to share their story of loss in the hopes of raising awareness.

Hope for the Warriors has given us opportunities to open eyes [concerning suicide] and continually gives us strength and support. We hope to get those who are struggling to a place where they can comfortably talk and know they do not have to carry their burdens alone. Princess Diana said, “I don’t go by the rule book…I lead from the heart, not the head.” That was our Kristie.  The Roberts

A special thank you to the Got Heart Give Hope ® sponsors, without your support of the gala and our organization we would not be able to restore family, self and hope in the live of our nation’s heroes and their families and bring the community together to thank and honor them for their resilience and achievements.