Operation IRAQI FREEDOM (OIF) was the seven-year military operation that begin in 2003. During the war in Iraq, 4,424 US troops died and 31,957 were injured.

HOPE Regional Social Worker, Brianne Sampson, shares the story of her high school sweetheart deploying in OIF in early 2003 and how the challenges that come from deployments have impacted their lives.

My husband joined the Marine Corps in 2002 and within 6 months of completing boot camp he was in Kuwait as a PFC waiting for the initial invasion into Iraq.

He checked into his unit in Twentynine Palms, on the other side of the country from where we grew up, after a brief leave block at home between his schooling and reporting date. He called me to tell me that he was probably going to deploy in a few weeks and I knew that I should go see him in California before that happened.

I convinced my family that I needed to go visit him even though it meant I would miss my college classes and possibly take a hit on my grades. Something in my gut told me I needed to go. We were new to the military life and most of our family didn’t understand, or maybe just didn’t want to believe that he could deploy that fast. 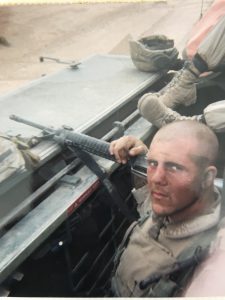 I booked the quickest flight I could and flew across the country for a very short visit. He proposed a few months before and my mom was certain that we would elope during my visit, but we didn’t because we wanted to have a wedding with all our family there.

On the way home from my visit I checked my cell phone during a layover. I had a message from him saying he was leaving for deployment and he didn’t know when he would be able to call me again.

I began crying as I called my mom to tell her the news. A stranger, sitting behind me, put her hand on my shoulder and said she would pray for him.

After he left, it was several weeks before I heard from him again. This was the trend that continued the entire deployment. I remember stepping out of my classes on the rare occasion that I received a call from him using a satellite phone.

Those calls were very few and far in between.

My mother-in-law would record the news every day with a VHS tape. Each day after work I would go to her house and we would watch the news, hoping to catch any glimpse we could of our Marine.

We would save all the newspaper articles mentioning Marines, including the one I was featured in, which shared our story. We wouldcalleach other throughout the day if we thought we saw a picture online that looked like him. 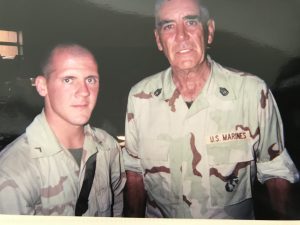 During this time, we were also trying to plan our wedding. Most of the planning was left to me since our primary source of communication was through handwritten letters that took months to arrive.

A deployment that started in January without an anticipated end date made it very difficult to pick a date. We were told he would be home in June, and then July, and then August.

We thought for sure he would be home in August.

We moved forward with finalizing our details and ordering items for the wedding. We were then informed the deployment was extended, again. Our cake cutters had already been engraved with the original date we picked.

The deployment didn’t end until September postponing our wedding date for a third time. He made it home in September and we finally wed in October.

The homecoming was surreal. He told us stories about watching the statue of Saddam Hussein fall and about the contraband in the palaces kept by Saddam and his family. I remember him talking about posters of Britney Spears and other American celebrities hanging on the wall. He shared his experience of seeing the Iraqi people being thankful and welcoming of US Troops.

This was only 1 of 4 combat deployments he endured, both to Iraq and Afghanistan. Each deployment things became a little easier in some ways and harder in others. The communication certainly improved.

However, the intensity of the deployments and circumstances surrounding each deployment created new challenges. There came a point where I wondered how much ‘luck’ he had left, but we have been blessed to have a happy homecoming after each deployment.

Looking back on the challenges we experienced, how far we have come, and how much it has impacted our lives, I am so thankful that I get to spend my days helping other service members and veterans who have endured so much. 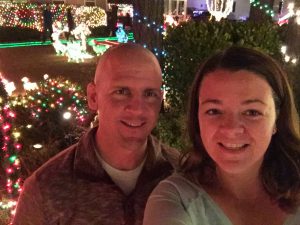